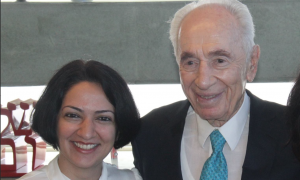 The former president said that Persian king Cyrus the Great had actually been the first Zionist, telling Jewish leaders to “take your people and go to your land.”

Faghih Imani, who lives in Norway and is currently on a visit to Israel, said that she believes “peace will come to the Middle East when we engage people of different sides.”

She said that the young generation of Iran, particularly women, can help bring peace into the region.

The pair were also joined by Israeli singer Rita, who was born in Iran and emigrated to Israel with her family as a child.

Rita said that she envisions a concert to promote peace between the countries, featuring Israeli and Iranian artists, as well as prominent international; artists who support peace, such as U2 singer Bono.