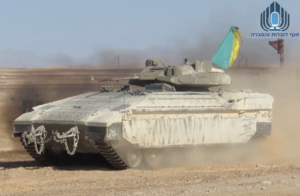 Unlike the Merkava Tank, the cannon in the Namer (Hebrew for “leopard”) will not require a soldier to operate it while standing in the turret, freeing up space and enabling the APC to transport more soldiers. The gun is controlled by soldiers riding inside the belly of the Namer, with the aid of video cameras.

“An APC containing a turret and cannon gives it a advantage during urban warfare” said Colonel Baruch Matzliach, who runs the Defense Ministry’s Merkava tank development program. “The shortened cannon makes it more maneuverable, and [gives it] the ability to provide firepower to infantry soldiers. It also lets infantry soldiers be more independent on the battlefield, with less dependence on other units to provide firepower.”

The cannon was added to improve the Namer’s urban warfare capabilities, something that the IDF attached top priority to after 2014’s Operation Protective Edge. Another APC, the ‘Eitan’, was introduced in July 2016, and is considered more maneuverable in urban warfare settings due to its having tires, as opposed to the more common tank treads.

Used by the Golani Brigade, the Namer is the IDF’s most fortified APC, significantly more protected then the ‘Achzarit’ used by the Paratroopers and Givati Brigades, and light years ahead of the Vietnam war-era M113. The Namer uses the same armor as the Merkava Tank, and is outfitted with the same Trophy anti-tank missile protection system.