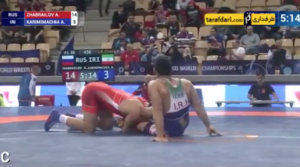 Iran’s government hailed wrestler Alireza Karimi-Mashiani for his “noble and heroic action”, saying he is “a source of pride and praise,” after he threw a bout against a Russian opponent in order to avoid facing Kalashnikov.

Karimi-Mashiani was on his way to a win over Russia’s Alikhan Zabrailov and a showdown with the Israeli when his coach began shouting in Persian from the sidelines, “You must lose, Alireza!”

“Your noble and heroic action in the world competition in Poland, abandoning the medal and the podium in support of the highest human values, is a source of pride and praise,” read an official statement on the website of Iran’s youth and sports ministry.

The country’s wrestling federation claimed he had acted in similar fashion back in 2013.

“It is the second time that you have risen up against the oppression of the Palestinian people by abandoning your rights in an act of absolute submission,” the federation wrote.

The hashtag #youmustlose was trending Monday in Iran, with many comments also speaking out against his actions.

“It is not difficult not to face an opponent so you do not recognize the false identity of his government,” said reformist MP Mahmud Sadeghi. “But it is very difficult to be forced to weakness and forced to defeat a rival.”