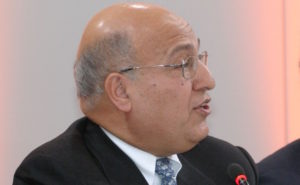 Former Palestinian negotiator says in an interview that the Palestinian Authority will never stop monthly stipends to jailed assassins, attempted murderers, or their families, declaring them “heroes.”

Former Palestinian Chief Negotiator Nabil Saath ruled out the cessation of payments to imprisoned terrorists, telling Palestinian National Television Sunday: “We will never stop caring for these men and their families. These men are heroes.”

Former Chief Palestinian Negotiator Nabil Shaath: We Will Not Stop Payment to Prisoners and Their Families pic.twitter.com/OxTrXpUfAF

“They did not demand anything.”

Palestinian Authority Chairman Mahmoud Abbas concurred with Shaath on the cessation of payments, telling Israel’s Kan 11 that “I do not intend to cease paying salaries to the families of prisoners and martyrs, even if it means I lose my position.”