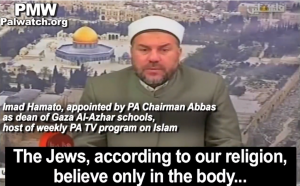 “Our conflict today between us and Israel is the conflict between spirit and body,” Hamato says with a green screen of Temple Mount behind him. “Israel’s global media has expanded, and its war against the Arabs and Muslims is through sex mania which it distributes globally. Israel had to use this sex mania, as we mentioned in a previous lesson, in order to destroy the spirit of Arabs and Muslims. Everything among the Muslims has died, except for their lust.”
RELATED:

Hamato goes on to specify exactly what kind of immodesty was spreading: “Therefore we see filth and immodesty on many satellite channels, pictures and ads for penis enlargement and for all sorts of things. All of these are contrary to modesty.”

Why does Hamato suppose Jews would do such a thing? Because, he says, “The Jews, as it is said in the Quran, believe only in the body, not in the spirit. What has Israel given to the world in our times, aside from moral corruption and corrupt values, aside from the use of drugs and pills?”

Hamato then turns on long-standing ally of Israel, the United States, who he claims has been controlling the moods of citizens of the Middle East using drugs in Brave New World fashion: “I said in a previous lesson that the CIA has a unit called the Unit for Creating the Global Mood. They look at a map: ‘What is appropriate for Gaza, or Jordan, or Syria? Tramadol pills [pain killers]? Mood enhancers? Hallucinatory substances? They are produced in India, sent to Israel, and distributed in Sinai. Afterwards, they are spread in the region in order to destroy what remains of our children’s values.'”

The program was broadcast this month as a rerun from 2015. Hamato has long been a controversial character on the topic of Israel and religion in general. In 2006, he called on the pope to “repent and ask for forgiveness,” and added: “We want to use the words of the Prophet Muhammad and tell the pope: ‘Aslim Taslam.'”

Aslim Taslam is a phrase that was taken from the letters sent by the Prophet Muhammad to the chiefs of tribes in his times in which he reportedly urged them to convert to Islam to spare their lives.

While there is no evidence of Israel exporting sex mania, as a weapon or otherwise, here are a list of seven other contributions Israel has made to the world.