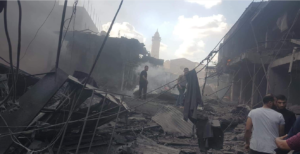 Palestinians in the Gaza Strip said that the explosion took place in a warehouse used by Hamas for storing weapons.

Hamas said it has launched an investigation, but has not provided any details.
Thursday’s explosion occurred shortly after 8 a.m. in a house located in the Al-Zawiya market area in the center of Gaza City. Palestinian sources said that 69-year-old Atta Ahmed Saqallah died and 14 civilians were injured, including six children.

Medical sources at Shifa Hospital described the wounds of one of them as critical, according to the Palestinian Al-Mezan Center for Human Rights. The three-story house was partially destroyed, while neighboring houses and shops were partially damaged, the center said in a statement. According to eyewitnesses, a fire had broken out in the house before the explosion. 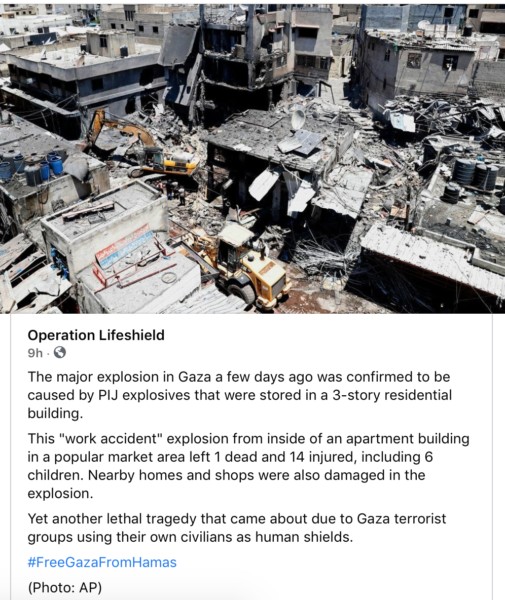 “Al-Mezan Center for Human Rights in Gaza views the explosion incident with grave seriousness, as there have been repeated incidents of internal explosions in houses in overcrowded residential neighborhoods for various reasons in the past, which resulted in the killing of a number of civilians and the destruction of homes and public and private properties,” the statement read.

“Accordingly, Al-Mezan reiterates its call for a comprehensive and serious investigation into this incident and other similar events, to publish the results of the investigation publicly, and to take the necessary measures to ensure that it does not recur in order to preserve the lives and property of citizens.”

The Palestinian NGO Network, an umbrella organization comprising 133 member organizations, also called for a “serious and transparent” investigation into the explosion. “The Network stresses the need to expedite the provision of all forms of assistance and support to those affected,” the group said. “It also stresses the need to announce the results of the investigation and to take serious measures to prevent such explosions from happening again.”

Palestinian writer Fadel Al-Manasfeh said it was clear that Hamas chooses popular markets as a safe place for its ammunition warehouses because it knows that Israel does not target such places. He said that Hamas was “confused” by the explosion because one of its weapons warehouses had been discovered. He also pointed out that a similar explosion took place in an open market in the Nuseirat refugee camp last year, killing more than 10 Palestinians and injuring dozens others.