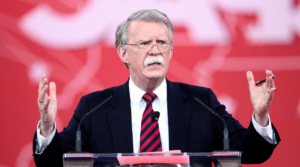 US national security adviser John Bolton told reporters at the White House on Wednesday that the president authorized withdrawal from the Optional Protocol to the Vienna Convention on Diplomatic Relations— while remaining party to the overall treaty— in order to undercut “politicized litigation” from the “so-called state of Palestine,” currently challenging the US for its relocation of the US embassy in Israel to Jerusalem.

“We will commence a review of all international agreements that may still expose the US to purported binding jurisdiction dispute resolution in the International Court of Justice,” Bolton said, also outlining a similar move on a treaty at the core of litigation with Iran.

Bolton said the moves were less about Iran or the Palestinians and more about the ICJ, which he and the rest of the Trump team considers an “ineffective” body without jurisdiction over the US.

The adviser dismissed a question from a reporter as to why he did not recognize Palestine as an existing state, citing the reality of its existence as a political body seeking official statehood— a possibility in peace talks with Israel, he said. Currently, Palestine “does not meet the international law test of statehood,” Bolton explained.

He declined to answer questions on the administration’s upcoming peace plan, only stating that it would be released in due course when the timing is right.