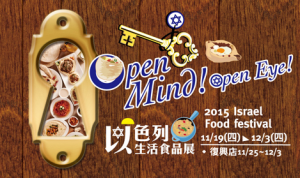 The food festival, that was initiated by the Ministry of Economy’s office in Taiwan and Israel’s Export Institute, is part of a concerted effort to break through to new markets in East Asia. In addition, Ministry of Economy’s Director General, Amit Lang, has inaugurated a Ministry office in Osaka, Japan. The auto industry of the East is also interested in new Israeli technologies and innovations. Lang headed a delegation of 11 Israeli companies from the auto industry that met representatives of Honda, Suzuki, Daihatsu, Panasonic and Datsun recently. The delegation met with the giant among car manufactures – Toyota, for the first time.

In the first ever food festival with Israeli participation, one can find Israeli Olives, spices, Tahini, Halva, fresh salads and so on. Among the companies present were well known brands like Neviot mineral water, the Prigat fruit juices, Wissotzky Tea and Salt of the Earth. There were also companies with unique Israeli products like the Ta’am VaReach spice company with its authentic Middle Eastern spices, Matza bread of Aviv bakery along with Israeli wines and honey. Gourmet To Go presented Couscous, Falafel and other heat-and-eat dishes.

The Israel Food Festival was launched for the first time in Taiwan at City Super.

City Super is a well-known supermarket chain store founded in Hong Kong that operates in several Asian locations five of which are in Taiwan’s capital Taipei. This Supermarket chain specializes in fresh fruits and vegetables. The chain regularly holds food festivals and is considered a major influence of new tastes and products unknown to the local people.

Israel’s first ever participation in this festival allows the introduction of her products to the Asian market, for the first time ever. The trade attaché of the Ministry of Economy’s office in Taiwan, Doron Hamo, says that “this is the first step in introducing Israeli products to Asia that has yet to be exposed to the variety of Israeli tastes. Despite cultural differences in taste, we see a great potential, and just as these tastes succeeded in Europe they will also appeal to the Asian pallet. Success in Taiwan, known for its diverse food culture, will create an interest among her neighboring countries, China, Korea and Japan.”

According to the Food & Beverage Manager of Israel Export Institute, Caroline Nave, “in light of the obvious need to target diverse export markets, over the past years we have witnessed diverse exports to Eastern markets. Specifically, we have witnessed a growing Asian interest in the Israeli food industry. In the first half of 2015 the export of food and beverages increased by 12 percent. The Taiwanese are especially interested in healthy and oriental foods more suited to their life style. The next step will be aggressive marketing of such products to Taiwan.”

And if this is not enough, food buyers from the Philippines, Vietnamese owners of supermarket stores and Chinese buyers from selected companies have recently been invited to visit Israel.