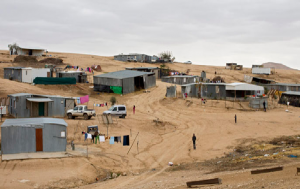 In 1995, after the government decided to create the Ramat Hovev industrial area, members of the ‘Azazme tribe from Ramat Hovev moved to Ramat Negev council fields, and created illegal structures next to Kibbutz Revivim.

The temporary residence soon turned permanent, and in 1999 the government decided to whitewash the site and retroactively recognize it as a valid community. The state also invested millions of shekels in developing the area for housing, town planning and preparing the infrastructure for the residents.

Since then, and even though the Bedouin residents were offered temporary and legal solutions in the organized community, dozens of buildings continued to be built without permission on the private land owned by Jews. This land was located far from the community’s master plan.

In 2013, Regavim and the landowners appealed to the Be’er Sheva district court, demanding that it instruct the state to destroy the illegal constructions and to prioritize the enforcement of the previous plan, because the land is privately owned.

The appellants emphasized that the state should accept its appeal because of the fundamental right to property and because the residents have no means to remove the invaders from their land.

The state disagreed and announced that it was conducting a “peaceful” dialogue on the dozens of homes in the form of evacuation-compensation. The court accepted the state’s claim and rejected the petition.

The landowners and Regavim then appealed to the Supreme Court, asking the justices to set a clear deadline for the state to evacuate the invaders. During last week’s discussion over the case, Regavim’s lawyer stated that “This is a problem that the country has been dealing with for dozens of years without a clear success. We said that it would be proper to budget five years for the destruction. We aren’t talking about a couple of days, but rather a period of time.”

In sharp contrast to cases in which Jews are accused of illegally building on Palestinian land and the court directly ordered them evacuated, Chief Justice Miriam Naor declared that removing the Bedouins would severely disrupt their lives.

Justices Naor, Zylbertal and Mazuz decided to reject the landowner’s request. Their laconic verdict avoided dealing with the petitioners’ claims and was solely based on a technical clause in the Civil Procedure Regulations that allows them to reject an appeal without an explanation. They “sweetened” the bitter pill by not adding an additional fee to Regavim’s legal costs, which have totaled tens of thousands of shekels over the course of the case.

Mazuz’s recommendation in a similar case: Take the land from its owners

This controversial ruling joins a similar petition from only a few weeks ago. In early February, the Supreme Court examined another Regavim case about a community in the Negev where Jewish owners privately purchased the land about 85 years ago. Members of the Abu Queider tribe recently entered and began building illegally.

In that case, the government initially stated that it intends to evacuate the tribe members to the city of Rahat. However, Rahat has opposed such decisions for years, and some of the Abu Queider members also refused to abandoned the land they had invaded.

In his ruling, Justice Mazuz advised the state several times throughout the hearing that it should consider taking the land away from its Jewish owners and retroactively recognizing the illegal community in its place. “I understand the the state does not wish to accept the community’s idea instead of its own. This is apparently the simplest option in some ways, to take away the private lands and to prepare the site.”