Despite the festive atmosphere, the event was not free of political tensions between Israel and the Palestinian Authority. 102 Gazans requested permission to participate in the race including Nader Al-Masri, who represented the Palestinians at the 2008 Olympics in Beijing and won the Palestine Marathon last year. 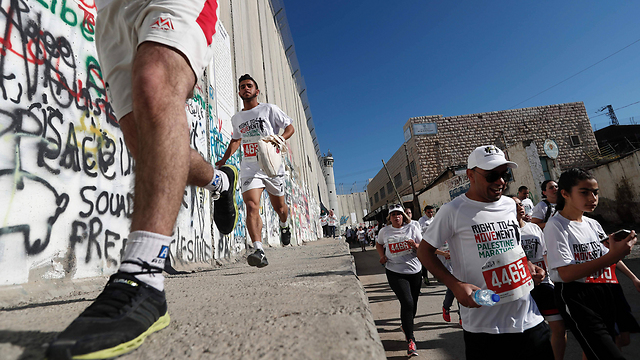 The Palestinian Olympic Committee submitted the names of the Gazan runners to the PA Civil Affairs Ministry two weeks before the race. And the Civil Affairs Ministry only sent the Coordinator for Government Activities in the Territories (COGAT), the names a week before the race, leaving insufficient time for Israeli authorities to prepare permits for the Gazan runners.

COGAT sources said, “Palestinian officials are being provocative and trying to delegitimize Israel. The request was submitted with insufficient time for us to handle it.” COGAT also accused the Palestinians of repeatedly exploiting sport for political gain.

Gisha, an Israeli NGO, demanded that Israel review its cumbersome bureaucratic processes that lead to inability of the Gazan runners to participate in the marathon.