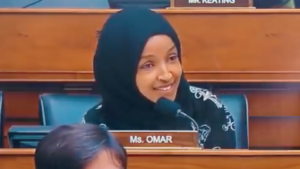 Dalia al-Aquidi is tired of hearing the Democratic representative play a divisive identity politics game, so she has joined a growing field of Republicans determined to take the Somalian-born congresswoman out at the next election.

“She’s spreading hatred, and she is spreading racism throughout not only her district, not only her state, but throughout the whole country, and this is very important,” al-Aqidi, 51, told the New York Post on Thursday after announcing her bid. “She’s hurting the moderate Muslims; Muslims like myself. She doesn’t represent me as a Muslim.”

State Rep. Ilhan Omar was arrested in 2013 for trespassing

Speaking to Fox News, she added: “She needs to be stopped. I truly believe that I’m strong enough to beat her at her own game.”

Al-Aquidi plans to neutralize Omar’s background as a Muslim refugee as a campaigning point by bringing her own story to the table. Omar fled Somalia with her family aged 9, while al-Aquidi escaped Saddam Hussein’s reign in Iraq with her family in the early 1990s when still in her 20s. “[We’re] basically the same,” she told Fox.

However, unlike Omar, al-Aquidi rejects identity politics and the division it brings to America. “Muslims, Christians, Jews are all Americans,” she said, adding: “Every time she [Omar] opens her mouth she says something either anti-US or antisemitic.”

It’s time to defend America! I’m running for Congress because we’re not as divided as Ilhan Omar and the far-left would have us believe. I’m running to bring us closer together. https://t.co/sa9dsHHTeO

In early January NGO Stop Antisemitism named Omar as their Antisemite of the Year following a poll, which also included Louis Farrakhan and Richard Spencer, for, among other things, accusing Israel of having hypnotized the world.

Al-Aquidi is used to the politics game, having enjoyed a prestigious journalistic career as a political journalist working for Voice of America and then as the White House correspondent for Alhurra, a US-based Arabic channel which broadcasts in the Middle East. She says she is grateful to America for the opportunities she has enjoyed.

“I am loyal to the country that gave me a chance, gave me a brighter future,” she told Fox, comparing herself to Omar who she said “continually tries to weaken the country and divide us.”

However, despite her criticism of the freshman congresswoman, al-Aquidi acknowledged that running a negative campaign would not be in her best interests overall. “Conflict resolution is an art. You cannot do anything without a conversation. You talk to the other side and try to figure out something that will be acceptable,” she said, drawing on her journalistic experience. “Trashing the other side will get you nowhere.”

Instead the focus of her campaign will be on what more can be done for the residents of Minneapolis, who she accuses Omar of having ignored in favor of raising her own political profile. Al-Aquidi recently moved to the city and has spent every day talking to locals about the issues that move them.

“I’ve done my homework for months and months before I decided to move here,” she told the New York Post. “On Thanksgiving, I helped feed more than 250 homeless people in Minneapolis, which she [Omar] doesn’t remember. She doesn’t even talk about homeless situation in Minneapolis, which is extremely cold and there are not enough places of shelters for them to sleep in. It’s a very, very important problem in Minneapolis, and it’s getting very cold.”

There is evidence that Omar’s constituents are sympathetic to al-Aquidi’s criticisms of their representative. Omar campaigned on a platform of giving the Somalian community a voice, but despite having introduced the Homes for All Act which would authorize the expansion of America’s public housing supply by 12 million units, some locals have said that they feel her focus is elsewhere.

“It’s just one crisis after another. She could have done so much more for our community with immigration and education, but she’s not. She’s picking fights,” one Somali man who chose to remain anonymous told the New York Post.

Al-Aquidi is prepared for a tough fight which will see her go up against a number of fellow Republicans including former auto sales manager Brent Whaley, special-education professional Danielle Stella, minister and missionary Lucia Vogel, businessman Lacy Johnson, and activist Alley Waterbury. If successful, she then faces a huge task to flip the district, which Omar won with a landslide 78% in 2018.

Curbing gang violence and bringing people together will be high on her agenda, along with the homelessness issue. But al-Aquidi admits that she chose to run against Omar specifically, seeing the congresswoman herself as a threat to America’s interests.

In a BREAKING NEWS article, still unreported in Israel’s press, Rep. Ilhan Omar is now under a FBI investigation, with the assistance of two other Federal Agencies, the Department of Education Inspector General and Immigration and Customs Enforcement (ICE).