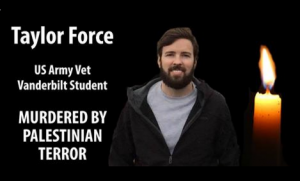 WATCH VIDEO: Breaking down largely along partisan lines, democrats debate against legislation that would deduct funding to the Palestinians if PA leadership continues to divvy out monthly stipends to jailed terrorists and the families of terrorists that were killed.

Twenty-nine-year-old Taylor Force survived military tours in both Afghanistan and Iraq, but never returned home from a visit to Israel. In March 2016, the US veteran was stabbed to death in Jaffa (located adjacent to Tel Aviv), a victim of a months-long violent uprising—dubbed the “Stabbing Intifada”—which killed dozens of Israelis and resulted in the deaths of more than 200 Palestinians (mostly attackers subsequently killed by security forces).

Bitter memories of the bloodshed will be rekindled Wednesday, when the US Senate Foreign Relations Committee holds a hearing on proposed legislation, The Taylor Force Act, that would cut off American funding to the Palestinian Authority (PA) so long as it continues to financially support—to the tune of over $100 million per year, or nearly 10% of the PA’s entire budget—prisoners convicted of violent crimes by Israeli courts, as well as their families.

The bill has garnered increased attention in the wake of Donald Trump’s visit to Israel and the West bank in March; when the US president pushed the issue high onto the peace process agenda, reportedly engaging in a heated discussion over the matter in a meeting with PA President Mahmoud Abbas.

Washington’s firm stance has provided leverage for Israeli Prime Minister Benjamin Netanyahu to double down on his own position. “The first test of peace is to say to them (the Palestinians), ‘Hey, you want peace? Prove it. Confront terrorism; stop rewarding terrorism; stop paying terrorists,’” the premier recently stated. He then asked, rhetorically, “How can you speak about peace with Israel and at the same time pay murderers who spill the blood of innocent Israelis?”

Former Israeli deputy foreign minister Danny Ayalon echoed these sentiments, telling The Media Line that, “first off, The Taylor Force Act is necessary from a moral standpoint.” Ayalon, also the former Israeli ambassador to the US, believes that, “From a political point of view, the legislation is also very useful because it is the only way to put pressure on the Palestinians, (while) still leaving it up to them to make a decision if they are serious about peace.

“If they continue to finance terror,” he continues, “we then know what their priorities are.”

Ayalon describes the bill as “a breath of fresh air” and an example of “thinking outside the box” because, he suggests, “it is the only way to find out whether the peace process can move forward. For the last 25 years, the policy has been to give in to the Palestinian preconditions and we know the results. Many Israelis dead, and Palestinians as well.”

For its part, the Palestinian leadership has vehemently opposed the demand, with a close aide to Abbas describing proponents of the initiative as “mad.” Former Palestinian minister of prisoner affairs, Ashraf al-Ajrami, explained to The Media Line that, “This is a very sensitive issue, as the prisoners are considered freedom fighters. The Palestinian people believe there is a right to resist the occupation and thus reject the label of ‘terrorist.’”

Al-Ajrami also notes that there are “extremist entities—like Hamas and Iran—that would fill the void if the PA discontinues paying the salaries, and this is not even in the interest of Israel.”

Hence the debate over the utility of The Taylor Force Act, especially given its potential to derail the renewal of peace talks before they even begin. There is additional concern that the legislation has become overly politicized, as opinions on the issue break down largely along partisan lines.

For example, former US ambassador to Israel under Democratic president Barack Obama, Daniel Shapiro, who is slated to testify at Wednesday’s Senate hearing, penned a high-profile article against the Act. While well intended, Shapiro wrote, “enacting (the law) would lead to a number of unintended consequences that would worsen things for Israel, the Palestinians, and the United States.”

Basing his arguments primarily on maintaining economic stability and satisfactory humanitarian conditions in the West Bank, Shapiro advocates for amending the bill, or, at the very least, including a waiver in it which would allow for continued, unconditional American funding of the PA in the event the White House defines doing so as national security interest (ironically, a similar waiver introduced into The Jerusalem Embassy Act, requiring that the American embassy in Israel be relocated to Jerusalem, has been signed by US presidents every six months since 1995, effectively preventing the move).

On the other hand, former assistant secretary of state under Republican president George W. Bush, Elliott Abrams, who will also appear before the Senate committee, favors the legislation. In “Stop Supporting Palestinian Terror,” Abrams argued that, “It’s time to end this scandalous American policy and insist that the Palestinians meet standards we would apply to any other aid recipients anywhere else in the world.”

The Taylor Force Act has caused such a cavernous split precisely because it goes to the heart of the conflict by identifying—rightly or wrongly—a root cause and offering a pathway towards solving it.

In this respect, the legislation is widely supported by those who believe that Palestinian rejectionism—which manifests in terrorism, and the support thereof—is the core issue. Enacting it, they claim, would effectively hold the Palestinians to account for what is viewed as an inflexible irredentism, which accounts for the refusal to recognize Israel as the “Jewish State.”

By contrast, the Act represents a roadblock to peace for those who view the occupation as the major impediment to ending the conflict. According to this line of thinking, the bill’s passage will lead only to additional Palestinian suffering, thus the hardening of their positions; which, effectively, would push the two peoples further apart and preclude the possibility of any future breakthrough.

Seeming to acknowledge the intricacies and delicate nature of the situation, in advance of Wednesday’s Senate hearing US Secretary of State Rex Tillerson told members of Congress that an “active” bilateral discussion was ongoing to resolve the matter.

Irrespective of which side of the aisle one sits on, most people invested in solving the Israeli-Palestinian conflict would likely agree to at least one point: More “talks about talks” does not bode well for peace.