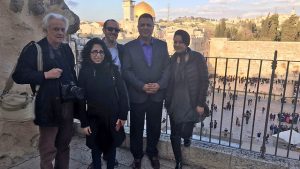 Members of the delegation visited the Old City of Jerusalem and the Temple Mount Monday as part of their tour. Additionally, they visited Yad Vashem and are expected to tour the foreign ministry, the Supreme Court and the Knesset on Tuesday.

The original plan intended to see the hosting of eight bloggers. However, two pulled out at the last minute due to refusals by authorities to allow them to travel to Israel. The foreign ministry is also planning to introduce the delegation to Israeli journalists covering the Arab world.

The North African bloggers listed their first impressions of the country as appearing Western and free. “This is an opportunity to see the real Israel without the media acting as a middle man,” said delegation members.

According to Kaabiya, the visit is important to potentially dispel possible myths or correct any false prepositions about Israel.

“It is of great importance to bring young people who were born with false ideas about Israel. The picture changes after these visits and their writing also changes the (international) opinion of Israel.”