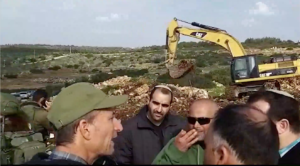 The construction began after the High Court of Justice rejected a petition filed by the residents of the village with the assistance of the Palestinian Authority.

According to the judges, it will be possible to build the fence in agricultural areas that have not been cultivated, whereas the cultivated areas “will be evacuated in accordance with the procedure set forth in the Order Concerning Government Property.”

A few hours after the verdict was handed down, Arabs entered the area of Shaked with a tractor in an attempt to plow additional land.

Yossi Dagan, the head of the Samaria Regional Council, came to supervise the construction work and make sure that it is carried out. There were clashes when the Arabs tried to stop the construction of the fence.

Dagan made it clear to the participants that no work would be stopped. “The time has come to stop the Palestinian Authority from taking control of state land in Judea and Samaria, which is part of the PA’s broad plan to take over Area C and establish facts on the ground.”

“It is inconceivable that the Samaria Regional Council itself is conducting the wars that the state should conduct, and we should not be the guards at the gate, but rather the state itself has allowed here for years Illegal construction and did not stop it in time even when it invaded an existing settlement,” Dagan added.

Yishai Hamo, the director of the Regavim movement, who represented the settlement in the High Court of Justice, said that the long saga could have been avoided had the Civil Administration had enforced the law in the early stages of the invasion. “The residents of Dahar al-Malek also invaded and built illegally within the boundaries of the settlement and they also exploited the judicial process in the High Court of Justice for the worse, while they chastised the verdict before the ink was dried up,” Hamo said. “The legal battle we have led has borne fruit. Now we have to make sure that the verdict is executed and the squatters will be removed immediately.”