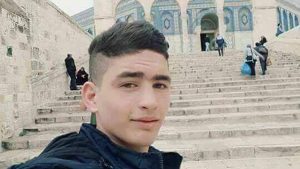 Master Sgt. A’s leg was lightly wounded in the attack that also injured two other young men. The attacker, 17-year-old Ahmad Jazal from the Nablus area in the West Bank, was shot dead by A.

A., who led a force of several officers in the pursuit of the terrorist on Hagai Street near Damascus Gate—a street where several attacks occurred in the past—described the moments of drama this afternoon: “During a shift in the Old City, I received a report about two people who were stabbed by a terrorist. I asked the people, ‘Where did the terrorist go?’

“They showed me where he ran, a residential building… I ran into the house, and suddenly the terrorist jumped on me with the knife, fired a few bullets at him and neutralized him.”

The Border Police released a statement praising their officers, saying that “their professionalism and swift action led to a swift end to the incident and to the prevention of continued harm to innocents.”