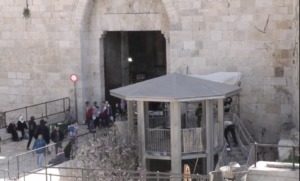 A new Israeli Border Police guard tower stands at the base of the Damascus Gate entrance to Jerusalem’s Old City.It’s a noticeable part of the landscape and an example of Israel’s increased security presence at the ancient entrance to the Muslim Quarter, which in the recent past has been a flashpoint for violence.

Prime Minister Benjamin Netanyahu called the Damascus Gate a “symbol of terror” in June 2017, following a deadly shooting and stabbing attack in which a Border Police guard was killed nearby.

To this end, the Damascus Gate guard tower will be used as a police checkpoint and to conduct weapons searches.

The Media Line first inquired about the work in mid-February, when laborers were still welding the guard tower and separate observation posts had just started being crafted. The work is expected to be completed by mid-March.

Israeli border police standing watch will then switch from their temporary platforms to the new permanent observation posts that are square, built of stone and covered with a steel roof. They’re set on opposite sides of the Sultan Suleiman street entrance leading down the limestone staircase to Damascus Gate.

“At the moment, due to the fact that we’ve seen a large number of attacks, the stands have been set up in order to maintain the safety of our officers and border police,” Israel Police spokesman Micky Rosenfeld told The Media Line. He said the guard towers will provide an “overall perspective and view of the area working together with the CCTV cameras above, giving vital and critical information to prevent attacks.”

Last June, Public Security Minister Gilad Erdan revealed there had been, to that point, 32 terror attacks in the area of Damascus Gate since the beginning of 2015, adding that Israel would be introducing “unprecedented” counter-measures including adding additional cameras, police posts and even changing the topography of the gate.

“Within that specific area, police officers have been injured and attacked,” Rosenfeld asserted to The Media Line, noting that several major bus terminals near Damascus Gate contribute to the large daily volume of people going to and from the Old City, which, in turn, increases the risk of attacks by so-called “lone wolf” assailants—unaffiliated with any terrorist group but rather carry out attacks on their own volition.

While some people on a recent sunny afternoon walked by the new guard tower without looking at it, others did stop to inspect. “This makes me sad and angry,” east Jerusalem resident Diana Abu Ramadan, flanked by her two children, told The Media Line. “We are shocked by this. We don’t like it.”

Another east Jerusalem resident, Abdullah Farhat, told The Media Line that he understands why the new guard tower and observation posts are being erected. “People have come with knives and attacked,” he stated while observing the steel tower under construction, the sound of electric saws piercing through the air. “This is for the (Israeli) soldiers because they have big problems here.”

Still, Farhat said he was concerned about how the new security structures will affect the daily lives of people who travel through the Damascus Gate.

In fact, some Palestinian leaders have raised objections to the new towers and posts, concerned about the over-saturation of police in the area.

Accordingly, while Minister Erdan declared, “Damascus Gate is going through a revolution,” it may not be a transformation that many people want.