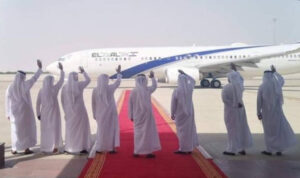 HISTORIC: President Trump on Air Force One’s flight to the Jewish State was the first flight to have a publicized flight plan to successfully fly directly (non-stop) from Saudi Arabia to Israel’s Ben Gurion International Airport. – May 22, 2017 – Screenshot: Israel’s PMO

The news comes just a day after the first flight from Saudi Arabia landed in Israel, as an Emirati 737 Royal Jet landed in Ben-Gurion airport Monday evening.

This is the latest among improving regional ties for Israel: agreements to normalize ties with four nations — UAE, Bahrain, Morocco and Sudan — Have been realized since the 2020 Abraham Accords. 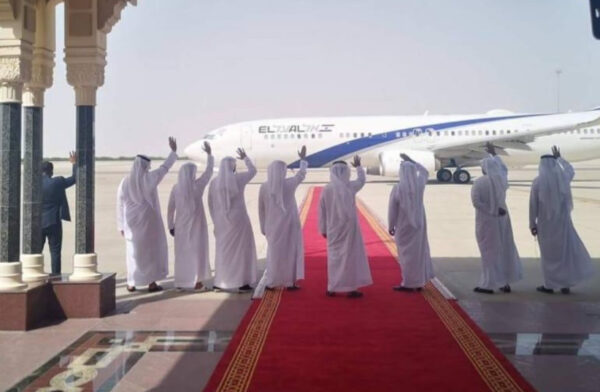 While there remain no commercial flights between Saudi Arabia and Israel, as the two states share no official relations, the flights are a considerable advancement in Saudi-Israeli relations, as both nations finally opened their airspaces to each other just last year.

Surrounded by nations that have clashed with Israel in the past, free air travel is not something that is taken for granted in Israel. Along the 2020 normalization of ties with Bahrain, Sudan, Morocco and the UAE was the opening of airspaces to Israeli flights, along with announcements of direct flights to Dubai, Morocco, and Bahrain.

Prior to the opening of Saudi airspace, El Al’s planes had to follow a long, winding route to Mumbai in order to avoid Saudi airspace, adding roughly two hours to the trip from Tel Aviv and putting the Israeli carrier at a huge disadvantage to competitors, who are allowed to fly direct. Similar examples make flights to some locales out of Ben-Gurion difficult to navigate and potentially dangerous.