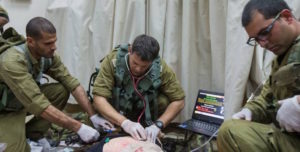 Nothing simpler: a Palestinian passed the security fence from the Gaza Strip into Israel today after Hamas forces shot him. IDF soldiers helped him – this is a purely humanitarian issue.

The State of Israel and its army care for Palestinian life more than Hamas does, and this is the issue.

“The more you internalize it, people of Gaza, you will understand that Hamas has nothing to offer. You deserve more!