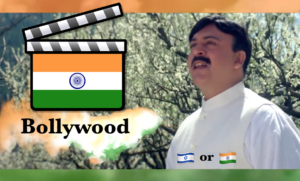 The alleged similarities between Anu Malik’s song “Mera Mulk Mera Desh” and Hatikva were only discovered when gymnast Artem Dolgopyat won Israel’s second-ever gold medal at the Tokyo Olympics over the weekend.

After Hatikva was played in his honor at the medal ceremony, many Indian social media users began commenting that Malik’s song was too similar to Hatikvah to be mere coincidence.

The 60-year old film composer was reportedly mocked on social media for the source of the music to “Mera Mulk Mera Desh” which was from the 1996 film “Diljale” starring Ajay Devgn, Amrish Puri, Sonali Bendre, according to Indian media reports.

“The National anthem tune has some familiarity to the Indian song Mera Mulk Mera Desh?? Or is it just me?” tweeted Maya Sharanyashettyy.

Another Twitter user, @TrulyMonica, tweeted, “So, Anu Malik didn’t spare even Israeli national anthem while copying tune for Diljale’s Mera Mulk Mera Desh in 1996. Thanks to the Internet we now know this.”

The clip of Hatikva playing at the Olympics has gone viral due to the two compositions’ similarities, with a deluge of comments accusing Malik of copying the Jewish State’s national anthem for his song.

Malik has been accused of plagiarism in the past on social media, reported NDTV.

“Anu Malik copying the national anthem of a country to make a Bollywood song is so Anu Malik!” tweeted Aniket Malpani.

Hatikva was composted in the 19th century by Naftali Herz Imber of Zolochiv, Poland as a Jewish poem reflecting the Jewish people’s 2,000-year old hope of returning to Israel.