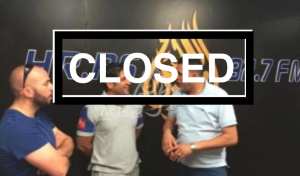 For the third time this month, Israeli forces raided a Hebron radio station overnight Saturday as part of an ongoing effort to clamp down on anti-Israeli incitement over the Palestinian airwaves.

The raid, conducted against Radio Dream’s offices, was carried out with the help of Shin Bet security agency agents and Civil Administration officials. The forces seized equipment used for broadcasting and presented its personnel with a military order shutting it down until May 26, 2016. The order was signed by the IDF GOC Central Command, Maj. Gen. Roni Numa. The station owner, Talab al-Jabar, told Reuters that the broadcaster, called Dream, was not inciting but rather reporting on events. “They want to shut down the free voice and to shut down the Palestinian media. I can tell you that ‘Dream’ radio will be back on air very soon and it will be stronger,” he said.

About a week ago the IDF handed the Radio Al-Khalil (Radio Hebron) station a similar order over its incitement activity and took some of the equipment there.

Taleb al-Jabari, the manager of Radio Dream, receives order to close for 6 months

About three weeks earlier, on Nov. 3, the military shut down the Manbar al-Hurriyya (Freedom Tribune) station, citing its ongoing incitement and efforts to organize violent demonstrations. It has also been accused of praising terrorists and airing false reports that Israel was kidnapping and executing Palestinian teenagers.

According to the Israeli defense establishment, the Hebron area has seen about 30 attacks in October, including 22 stabbing attacks. This has led to a larger military presence in the Hebron area and intensified the Israeli operations in the city, the largest under the Palestinian Authority’s control.