Israel Too is a Leader in Space Exploration

State of Israel has successfully launched 13 satellites that have collectively accumulated 66 orbiting years & has achieved 100% success in all orbit missions.

Israel is among the global leaders in many areas of space exploration, such as the possession of an extensive satellite system for research purposes. 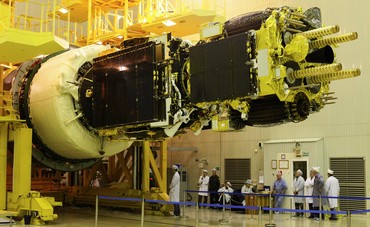 Science and Technology Minister Daniel Hershkowitz briefed other ministers at Sunday’s cabinet meeting on the nation’s activity in space and satellites, stressing the areas in which the country is a leader as well as its cooperative activities in the fields with other nations.

In addition to being among the top five leaders in developing a satellite research system, Israel is among the most successful in growth of sales for the space industry, improvement and broadening of space knowledge and infrastructure, and strengthening the link between its space research and society in general, Hershkowitz said.

24 years have passed since the launch of the satellite “Ofeq” 1. Today, Israel is one of the ten members of the prestigious “Space Club” – Photo Courtesy: IAF facebook page

Among the country’s current principle satellite projects is EROS-B, from which Hershkowitz displayed detailed pictures of the Temple Mount in Jerusalem and the Tabaqa Dam in Syria.

Another project is the Venus super-spectral satellite, a French-Israeli partnership that allows for agricultural monitoring by sensing from space, using a unique spectral and spatial resolution system. Similarly, a hyper-spectral Italian-Israeli satellite called Shalom focuses on agricultural and environmental monitoring, as well as searching for minerals and monitoring bodies of water.

A structure called Samson is the world’s first-ever autonomous structure of three nano-satellites – weighing less than 10 kilograms – featuring a low orbit of about only 600 kilometers, Hershkowitz said. The main goal of Samson is to pinpoint signs on the ground, such as locating and performing rescues in remote areas or disaster zones. Yet another satellite, the MuSAR partnership with NASA in the United States, integrates with the TecSAR Discovery mission and constitutes Israel’s first participation in an interplanetary mission.

Outside of its extensive satellite projects, Israel is also promoting the SPACEIL program, whose mission is to deliver the first Israeli spaceship to the moon by 2014 and win the Google Lunar X Prize competition for privately funded teams to get robots to the moon’s surface. To do so, the robots must travel at least 500 meters on the moon’s surface, sending video, images and data back to Earth. In addition to getting to the moon, Hershkowitz said that the project leaders hope to inspire and attract the next generation of engineers and scientists, promote research and enhance Israel’s image in the world as a science and technology leader.

A final bullet on Israel’s space and satellite agenda will be holding the 2015 International Astronautic Conference in Jerusalem, Hershkowitz said.