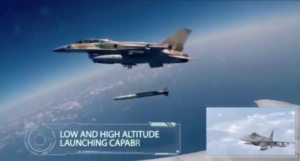 With tensions still high between Israel and Iran, a new supersonic air-to-surface missile designed for the annihilation of high quality targets has been developed by Israel Aerospace Industries (IAI) and Israel Military Industry Systems (IMI).

Dubbed “The Rampage” after a popular video-game, it is an accurate supersonic, long-range air-to-ground assault missile with a warhead, rocket engine and advanced navigation suit which allows for precision targeting at a very low mission cost compared to existing solutions.

The missile can be fitted to the Israel Air Force’s F-15, F-16 and F-35 fighter jets and is meant to be fired into areas protected by air-defense systems.

Amit Haimovich, director of marketing and business development for IAI’s Malam engineering unit told The Jerusalem Post that due to the combination of the Rampage’s speed and physical form, “it can be detected, but it is very hard to intercept.

“If you take the Middle East arena and areas protected by air-defense systems, the whole point of this missile is that it can hit targets within standoff ranges” without threatening the launching platform, he said.

The 4.7-meter-long missile, which weighs 570 kg., is guided by a GPS system giving it the ability to operate in all weather conditions as well as during the day or night.

According to Haimovich, once the Rampage is launched, it flies toward predefined coordinates, shaping its trajectory to hit the target according to its nature. The missile, he said, does not have a “pure ballistic trajectory which adds to its ability to penetrate any defended target.”

The targets that best fit the capabilities of the missile include communication and command centers, air force bases, maintenance centers, infrastructures and valuable field targets protected by anti-aircraft batteries.

The Rampage also features a warhead which was designed for optimal penetration, allowing for the destruction of targets inside bunkers.

Boaz Levy, general manager and executive VP of IAI’s Rockets and Space Group, said in a statement that the Rampage “is an important product that fulfills a true operational need in a very efficient way. IMI and IAI have invested a great deal of thought in developing this product, which reflects the extensive technological know-how and experience of both companies, with a price tag which is attractive and relevant for all global markets.”

“IMI Systems and IAI are proud to unveil a response to the challenges of modern battlefields. The Rampage joins a family of accurate rockets which we have been providing to advanced militaries for years,” said Eli Reiter, manager of IMI Systems firepower division. “Rampage complements the air response with a quantum leap in performance and extraordinary cost-effectiveness ratio, two factors which are important to many air forces around the world.”

Haimovich told the J’lem Post that IAI already has a buyer for the Rampage but could not reveal its identity.

The announcement of the Rampage comes as tensions on Israel’s northern borders remain high, with the IDF continuing to step up its cross-border strikes on Iranian targets in Syria.

Israel has been “managing a campaign against Iranian forces, especially on Israel’s northern border” for the past two years, IAF Commander Maj.-Gen. Amikam Norkin said in late May, just weeks after the air force carried out the most extensive operation in Syria since 1974, striking over 50 Iranian targets following a missile barrage of 32 Fajr-5 and Grad missiles toward Israel’s front-defensive line in the Golan Heights.

In an operation called “House of Cards,” dozens of positions and targets belonging to the Iranian Revolutionary Guard Corps’ Quds Force in Syria – including the launcher used to fire the rockets into Israel’s Golan Heights – were destroyed within 90 minutes by the IAF and the Northern Command.

Despite destroying a large amount of Iranian military hardware in the war-torn country, a senior IAF officer said last month that Iran still has long-range capabilities to strike Israel, which has continued to strike targets in Syria.

“The Iranian resolve in the region continues, and we keep operating,” he said, stressing that: “We have maintained our freedom of action over Syria.”