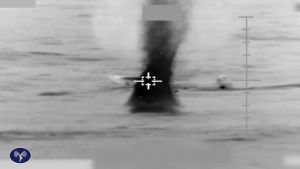 The boat was observed departing from the southern Gaza Strip and heading towards the Sinai. Several days later, the ship suspiciously reappeared with the rear of the vessel weighed down by cargo.

Intelligence information that found its way to the 916th squadron based in Ashdod allowed IDF forces to intercept the vessel off the coast of the Gaza Strip and attempt to detain those on board.

During the course of the interception, naval forces fired warning shots at the boat in an attempt to force it to a stop. However, the two Palestinians on board jumped into the water and managed to make it ashore, which prompted forces to fire on this ship’s motor. The motor subsequently caught fire, which spread to the cargo causing the weapons on board to explode.

“We observed the boat approaching from afar and using special sensors which we use to mark and catalogue Palestinian ships entering the southern Gaza Strip, identified it as a suspicious vessel,” Maj. Maor told Ynet. “Secondary explosions completely destroyed the ship.”

The destruction of the ship is the third of its kind conducted by the Navy and the Shin Bet in the last year and a half, which also includes the arrest of several Palestinians who were attempting to smuggle in weapons on Palestinian fishing boats. The Shin Bet has also identified a pattern in which Hamas attempts to smuggle goods from the Sinai into the Gaza Strip to sell and finance the organization.

“The Egyptians have destroyed most of the smuggling tunnels between Rafah and Egypt and as a result, Hamas is being forced to use maritime smuggling routes more,” said Maj. Maor, who added, “It is more complicated to operate in the southern Gaza Strip than it is in the north, but the relationship with Egyptian forces is very good and cordial. We maintain dialogue and coordination with them through battalion-level meetings on the beach.”

Hamas efforts to smuggle weapons and equipment into the Gaza Strip have occurred both above and below ground. However, since the end of Operation Protective Edge, many smuggling attempts have been foiled due to increased monitoring efforts undertaken by the Ministry of Defense. Raw materials for weapons and tunnels have been discovered in shipments of humanitarian goods.

Additionally, a Ynet report in December revealed a large weapons shipment from ISIS in Sinai to Hamas had been foiled. Most of Hamas’ smuggling attempts now mainly involve raw materials for the construction of tunnels and other domestically-produced weapons such as rockets.