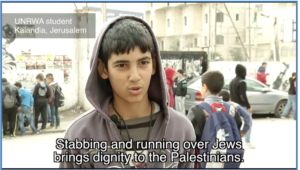 MP Jonathan Gullis, who initiated the debate with Minister of State James Cleverly, displayed a reading comprehension textbook for 10-year-olds, which praised Dalal al-Mughrabi, who killed 38 Israelis, including 13 children, on a bus in 1978.

Gullis cited research by IMPACT-se, a research institute analyzing textbooks, which reviewed 202 such books from the current Palestinian curriculum, finding “a systematic insertion of violence, martyrdom and jihad across all grades and subjects, where the possibility of peace with Israel is rejected.”

MP Stephen Crabb questioned “why there has been so little progress” in removing incitement from textbooks, pointing out that “concerns have been constantly raised by members across parties in this house about the use of inciteful language in textbooks, which, whether directly or indirectly, UK aid has helped to finance.”

Labour Friends of Israel Chairman MP Steve McCabe said: “I strongly support a two-state solution and it is precisely because of that support that I believe it is imperative that we tackle the issue of radicalization in the Palestinian school curriculum.

The textbooks “seek to pass on old hatreds and prejudices to a new generation of young people,” McCabe added. “It’s a barrier to reconciliation and coexistence, is pernicious and simply unacceptable.”

MPs also demanded that a long-awaited EU review of Palestinian textbooks be made public.

Cleverly responded that “antisemitism is unacceptable in all its forms. It is offensive, it is hateful and has no place anywhere in society, least of all in the classrooms.”

The minister said the government is “deeply concerned” by the incitement of hatred and violence towards Israelis in Palestinian textbooks.

“These are serious allegations and we take them seriously,” he added.

IMPACT-se CEO Marcus Sheff said the MPS “exhibited a great deal of frustration that years after the issue of hate in Palestinian textbooks was raised in parliament, no changes have been made.”

UNRWA students [Palestinians] admit to being taught to hate Jews and how killing them “brings dignity.” – Screenshots: The Center for Near East Policy Research

Sheff also said the European Commission has a responsibility to countries funding the Palestinian Education Ministry to make its report on Palestinian textbooks available to the public.

Jerusalem Deputy Mayor Fleur Hassan-Nahoum, who helped raise awareness of the issue via Conservative Friends of Israel, said that “today many rational, bipartisan voices in the House of Commons made very clear that the funding of incitement and Antisemitism in the Palestinian School Curriculum is no longer  acceptable, whether the funding by the UK is direct or indirect.”

“Building co-existence and a shared society starts with a child’s education,” she added. “The Palestinian school books are the antithesis of this and so if there is to be any hope of peace in the horizon and if foreign governments want to be a part of helping build the infrastructure for peace they have to start by regulating and influencing for the good the very education that they are funding.”