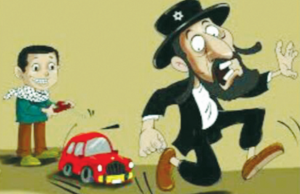 UNRWA employees undeterred with ‘slap on the hand’, continue to post anti-Semitic posts despite UN’s promises to take the racist incitement seriously.

UNRWA staff members who post photographs or text glorying the death of Jews and or Israelis on social media should be fired, said the non-governmental group UN Watch on Monday as it released a report detailing such activity.

The report showed a set of Facebook posts from Mazen Abo Hady who said he was a UNRWA teacher in Gaza, one could see an artistic graphic of a man clutching a knife and wearing a black and white Kafiya over his face breaking through an Israeli flag. Next to him the teacher posted the photograph of the victim of an October 13 vehicular Palestinian terror attack in Jerusalem, Rabbi Yishayahu Krishevski.

In a separate post, Abo Hady also displayed a graphic of man with a Kafiya around his face holding a knife as if it were a violin and playing it with a metal key, a Palestinian symbol for the right of return to Israel for Palestinian refugees.

Mohammed Al Jowhary of Jordan who also identified himself as an UNRWA teacher, was also featured in the report. He posted a photograph of a woman wearing knives as earings on October 27, 2015, the same day on which two Israeli soldiers were stabbed and wounded by Palestinians. The caption read, “New accessories for Palestinians.”

All the posts are still on the Facebook pages of the two teachers.

“UNRWA’s reported temporary suspensions of offenders are clearly not working. Giving a slap on the wrist sends the message that it’s business as usual. Instead, those who incite to racism or murder should be fired, under a zero tolerance policy, just as the UK government recently banned a teacher from the classroom for life over an anti-Semitic Facebook post,” said UN Watch Neuer,

“The UN and top funders of UNRWA such as the United States government must act immediately to terminate employees who are inciting murderous anti-Semitism and fueling the deadly pandemic of Palestinian attacks against Israeli Jews that have claimed the lives of innocent men, women and children,” said Neuer.

“We urge Secretary-General Ban Ki-moon to personally intervene because UNRWA has abjectly failed to uphold its promises to stop the poison,” said Neuer. “We urge Mr. Ban to take immediate action to terminate any UN employees who incite to murder.” “Moreover, we call for the establishment of an independent commission of inquiry, to include representatives of the US, the EU (which gave UNRWA $139 million last year), the UK ($95 million), and other top UNRWA funders, to investigate the culture of impunity for perpetrators of racism and incitement that pervades UNRWA.”

UNRWA spokesman Chris Gunness said in response, “We condemn and will not tolerate anti-Semitism or racism in any form. UNRWA always looks into credible reports of neutrality violations and takes all allegations of violations of UN principles very seriously. Already, working closely with Facebook’s legal team, we have brought about the removal of more than 90 imposter or unauthorized Facebook pages. In some cases, we have determined the alleged “UNRWA staff” are, in fact, not UNRWA employees or no longer UNRWA employees.”

“However, and very regrettably, in a number of cases we have found staff Facebook postings to be in violation of our social media rules. These postings have been removed and the staff have been subject to both remedial and disciplinary action including suspension and loss of pay,” he said.