Oman and Sudan have been mentioned as serious possibilities for ties with Israel in recent weeks.

The ministers had spoken before, and their ministries intend to cooperate on agriculture in the desert, using Israel’s expertise.

In an interview with an Emirati newspaper, Zamir said he hopes tourism between Israel and the UAE could start early next year. 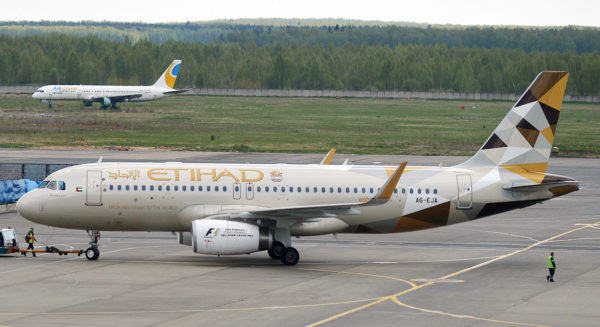 Etihad Airways is the second-largest airline and flag carrier of the UAE, after Emirates. Its head office is in Khalifa City, Abu Dhabi, near Abu Dhabi’s International Airport. Etihad Airways Airbus A320-200 – Photo: Wikimedia/Anna Zvereva

“Agreements to do with visas and tourism are at an advanced stage, and the two sides are expected to reach a deal soon,” Al-Ittihad newspaper quoted Zamir as saying.

Emirates Flight Catering said it had signed a memorandum of understanding to set up a dedicated production facility, Kosher Arabia, for kosher food at its premises in the UAE with production beginning in January.