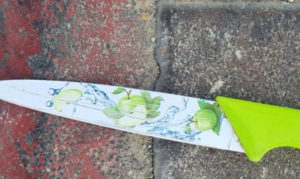 Scene of attack: The al-Zaim checkpoint where a Palestinian assailant used the pictured knife (pictured above) in an attempted stabbing attack on security forces near Jerusalem, January 30, 2019. – Both Photos: Israel Police Spokesperson

According to initial reports, a female terrorist attempted to stab security officers at the checkpoint Wednesday morning.

When soldiers spotted the female terrorist charging them with a knife in her hand, they opened fire, neutralizing her.

The terrorist was later declared dead.

No injuries have been reported among the Israeli security personnel in the area.

The main road between Maale Adumim and Jerusalem has been closed to traffic following the attack, Rescuers Without Borders said.