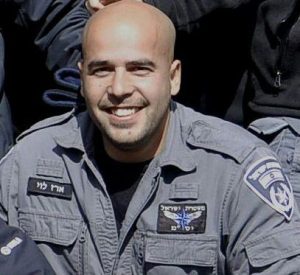 Police units were deployed to the Negev settlement before dawn on Wednesday to protect the demolition team from demonstrators who had gathered at the site of the planned eviction.

As Joint List MK, Ayman Odeh is seen confronting security detail, calls to move back are heard in the background, as rocks are being hurled at the police.

Before the operation was completed, however, a car driven by a terrorist associated with the Islamic Movement rammed a group of officers.

Police responded to the attack, shooting and killing the attacker.

The murdered officer has been identified by police as 34-year old Sergeant Major Erez Levy.

The wounded officer is reportedly in moderate condition.

Police say the terrorist responsible for Wednesday’s attack was a member of the southern branch of the Islamic Movement, and may have ties to the ISIS terror group.

In the wake of the attack, demonstrators clashed with security forces, hurling stones at officers.

Demonstrators protesting the eviction clashed with police in the wake of the attack.

Joint List MK Ayman Odeh, who had joined demonstrators to protest the demolition, suffered head injuries during the clashes, most likely from a stone hurled towards police.

“A 42-year old male was rescued and brought to us suffering from light injuries to the forehead and back, probably caused by a rock,” MDA senior EMT Vitaly Okomiansy reported. “We provided medical treatment and evacuated him to [Soroka] hospital in light condition.”

At roughly 9:00 a.m., a police spokesperson notified journalists that security operations at the scene of the attack had been completed, and the demolitions of the illegal buildings was proceeding.