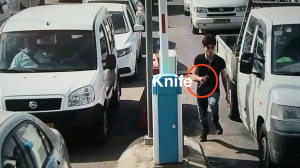 An internal investigation released by the IDF this week has uncovered the source of the ongoing, daily wave of Palestinian rampage in streets across Israel.

For the past six months, Palestinian men, women and children have been running wild with knives, stabbing and maiming innocent Israelis. Most were convinced that this is just another spontaneous outpouring of fanatical Islamic hate towards the Jewish nation. However, the source of the current violence turns out to be far more insidious, for it was a calculated effort by the Palestinian leadership.

It all began during the Islamic holy days of Ramadan, the yearly festival when Muslims fast all day and binge at night. During the entire month of Ramadan, most of the Palestinians who live in Judea and Samaria spend long hours at home in front of the television. The Palestinian Authority decided that this would be the perfect time to stir up even more hatred among the people, and began broadcasting thousands of hours of propaganda footage, 24 hours a day, seven days a week, with programs specifically produced to incite terror acts against innocent Israelis.

That is the frightening conclusion of the exhaustive IDF intelligence investigation. “These programs portray Jews only as blackmailing, physically abusing or killing ‘poor innocent’ Palestinians. Palestinians are being openly encouraged to be filled with rage and provoked to commit violent acts against Israelis,” said an IDF official. “These are the most popular shows, the ones that are the most viewed by the Palestinians,” he added.

In light of the IDF report, the Israeli government finally decided to shut down “any media channel inciting terror activities against Israel.” Last week, the IDF raided the administrative offices of “Pal Today,” a television station run by the terror organization Islamic Jihad and located just outside of Ramallah.

But it looks like it is too late, and too little. Palestinian populations throughout Judea and Samaria are already enthralled by the programs which have spread throughout the internet as well. According to the IDF report, whenever a program is shut down on TV, Palestinians will rush to find copies in order to find out what all the fuss is about.

To give just one example (most are just too horrific to describe) of the Palestinian broadcasts inciting violence against innocent Jews, one of the most popular shows being promoted is a series detailing the “heroic life and accomplishments” of Sheikh Ahmed Yassin, founder of Hamas. Yassin, who was the spiritual leader of Hamas before being killed by the IDF in 2004, was responsible for initiating all Hamas terrorist attacks on so-called “soft targets.” He particularly gloried in suicide bombings at restaurants, bus stops and public markets, anywhere that large numbers of unsuspecting men, women and children could be murdered.

In one episode, Yassin is seen calling on women to carry out attacks on soft targets on the streets of Israel. Yassin is shown expressing great satisfaction over a murderous suicide bombing by a young Palestinian woman that left dozens of Israelis dead and wounded.

Armed with this report, IDF generals are now talking with Israeli government officials seeking a green light to shut down even more Palestinian media outlets that are calling for violence against Israelis.

Update: This week it was reported that many of the Palestinian areas are unable to watch these hate-filled broadcasts as they are without electricity having refused to pay their electric bills, but still the terror attacks continue.