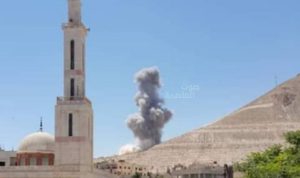 The Jordan-based outlet Al-Hadath reported that Tawil was in charge of creating an Iranian-backed terrorist network on the Syrian side of the Golan Heights, presumably in order to make that area a theater of operation against Israel.

Hezbollah has been involved in Syrian civil war for the past several years. Israel has warned Hezbollah it would not let the Shiite terrorist group build bases and networks in Syria that would be used as a staging ground for attacks against Israel.

According to the Syrian Observatory for Human Rights, the at-Tawil was killed after his car was hit from the air. Russian media said witnesses on the ground saw intense activity by Israeli aircraft nearby.

Earlier this week the Israeli Air Force hit targets associated with the Palestinian Islamic Jihad terrorist organization near Damascus. The PIJ said two of its operatives were killed in the strike.

What we are seeing with the latest string of eliminations is reflected by the policy of our most recent Defense Minister. Unlike the many so-called ‘hawk’ predecessors of Naftali Bennett, he actually turned into policy what he…and others have said:
‘No terrorist is immune from threatening to kill, maim or terrorize Israeli citizens with impunity. – As soon as you plan to harm Israel or those in Israel, citizen or not, you forfeit the right to continue….period.’

THIS is the new policy accepted and finally implemented by PM Netanyahu. #Bibi2020