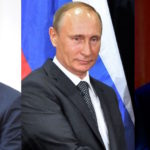 Syria leader has moved into an underground bunker with his staff, reported by a Lebanese newspaper that’s close to Damascus.

Lebanese newspaper Aldiyar, which is considered to be close to Syria’s official leadership, reported Saturday that Syrian president Bashar al-Assad is in an undergtound bunker at an unknown location, where he is staying along with his senior staff and other unknown senior officials. The bunker is serving as an operational headquarters in advance of the US attack on Syrian targets that is expected to take place by Monday at the latest.

Syrian President Bashar al-Assad and members of his family are in Tehran, after they arrived at Homeini Airport in the presidential plane Tuesday night, sources in Iran’s foreign ministry told the website of Lebanese newsaper a-Nahar. The news did not receive confirmation from other official sources. Daily newspaper Israel Hayom, which cites the report, notes that a-Nahar is considered close to Hezbollah as well as to the leadership in Syria and Iran. Continue Reading »

In addition, several hundred more of its guerrilla fighters have been wounded in the effort to keep Syrian President Bashar al-Assad in power, ITIC estimates. Continue Reading »

Assad: For Supporting Al-Qaeda, the West Will Pay Dearly

Syrian President says his regime’s defeat is not an option and warns the West that supporting Al-Qaeda will cost them heavily down the road.

Syrian President Bashar al-Assad warned the West on Wednesday that it will pay a heavy price for its alleged support of Al-Qaeda in Syria. According to AFP, Assad said his regime’s defeat is not an option.

He made the comments in an interview with state television Al-Ikhbariya, in which he said the West is playing with fire.

“The West has paid heavily for funding Al-Qaeda in its early stages. Continue Reading »

Israeli ambassador to US says that evidence of chemical weapons being passed to terrorist would be a “red line for Israel”.

Israeli ambassador to the United States Michael Oren warned Sunday that any evidence of chemical weapons being passed from the Assad regime to terrorist groups like Hizbullah would be a “red line for Israel” and could constitute military action.

While Oren could not confirm recent claims that the Syrian regime is mixing and moving components for the deadly sarin nerve gas, he said that Israel is watching the situation “very carefully.”

“Were those weapons to pass into the wrong hands — Huzbullah’s hands, for example — that would be a game-changer for us,” Oren told “Fox News Sunday.”  Continue Reading »

U.S. official report that Syrian Engineers that are working for Assad are combining the 2 chemical precursors needed to weaponize sarin gas.

International observers are now more worried than they’ve even been that the Damascus government could use its nerve agent stockpile to slaughter its own people, the report said.

The U.S. doesn’t know why the Syrian military made the move, which began in the middle of last week and is taking place in central Syria, nor are they sure why the Assad government is transferring some weapons to different locations within the country, as the New York Times reported on Monday. Continue Reading »

The Wall Street Journal reports that U.S. intelligence shows Syria has started to move some of its sizable arsenal of chemical weapons out of storage facilities• “This could set the precedent of weapons of mass destruction being used under our watch” • Over 200 people massacred yesterday by Syrian government forces, activists say.

By Reuters & the Israel Hayom Staff

WASHINGTON — U.S. officials said that Syria has started to move part of its chemical weapons arsenal out of storage facilities, The Wall Street Journal reported on Friday.