Flyers, distributed to the Arab Christian residents of the North Jerusalem neighborhood of Beit Hanina with threats of ‘slaughter’ should they remain, were signed, “ISIS in Palestine”

Flyers made their appearance in the North Jerusalem neighborhood of Beit Hanina on Thursday last week, signed by the “ISIS in Palestine” organization, with threats against Arab Christians of the area. Christians are threatened with slaughter if they do not evacuate the area by Eid al-Fitr, marking the end of Ramadan. The flyer went on to say that one month is enough time and warning for Christians to flee the area to avoid a massacre. Continue Reading »

After 2 Israel Policemen were hospitalized from an unprovoked Arab rock-throwing mob at Rachel’s Tomb yesterday, a ‘price tag’ (pay-back) attack in Jerusalem’s Arab neighborhood of Beit Hanina was discovered early this  morning.

The tires of 34 vehicles in the East Jerusalem neighborhood of Beit Hanina were punctured overnight Sunday, and the writing “Goyim in the country = enemies” was sprayed in Hebrew on a bus. 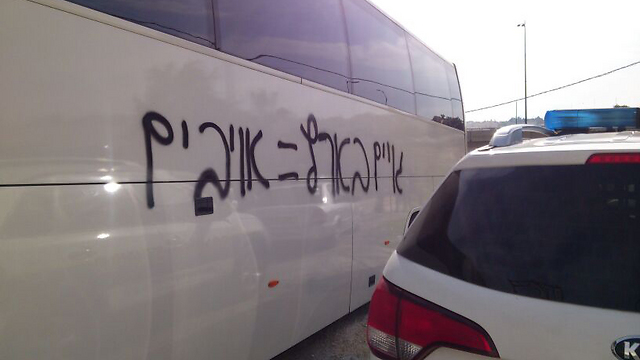 Graffiti that says ‘Goyim in the country = enemies’

Police opened an investigation into the alleged “price tag” incident.

This is not the first time a “price tag” attack strikes the neighborhood. Continue Reading »