New York Times reports how Obama & Kerry should ‘move on & devote their attention to other major int’l challenges like the Ukraine.’

U.S. President Barak Obama and Secretary of State John Kerry should drop their Middle East peace efforts and “move on and devote their attention to other major international challenges like Ukraine,” the New York Times wrote in an editorial on Tuesday.

Instead of continuing to promote peace negotiations, the paper wrote, the United States should “lay down the principles it believes must undergird a two-state solution, should Israelis and Palestinians ever decide to make peace.” Continue Reading »

Obama will meet with Prime Minister Benjamin Netanyahu on Monday at the White House and will push him to agree to the framework deal currently being drafted by U.S.

New York Times’ Tehran bureau chief reports on Twitter that Hassan Rohani has made the donation to the institution, which also serves non-Jews.

This is not the first time that such a donation has been reported.

Senior NYT analyst Thomas Friedman, lays out expected points of John Kerry’s framework deal, which he believes will include phased withdrawal from West Bank according to 1967 lines but will not allow Palestinian refugees to return to Israel.

Kerry and Netanyahu at a press conference in Jerusalem, January 2, 2014. – Photo: Reuters

Friedman, who is currently visiting Israel, said that Kerry’s framework document would present the core concessions that Washington considers Israelis and Palestinians need to make for a fair, lasting deal. Continue Reading »

CAMERA places billboard across The New York Times’ offices in downtown N.Y.C. calling on the paper to stop its bias reporting & slanted commentary against Israel.

Boston-based American media watchdog group CAMERA (Committee for Accuracy in Middle East Reporting in America) launched a campaign against The New York Times for what it claims is the paper’s biased coverage of Israel, the PRNewswire reported. 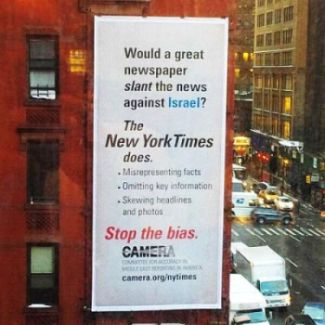 The billboard headline reads: “Would A Great Newspaper Slant The News Against Israel? The New York Times Does.” A short list enumerates criticism. Continue Reading »

NYT’s editorial board blasts Israel’s PM for his loud opposition to White House policies; writes if diplomacy fails, “PM & the hard-line interest groups will own the failure”.

The petty attack is because the PM quoted a 2005 Times editorial that applauded a deal that would lead North Korea to dismantle its nuclear weapons program.

An ongoing battle between The New York Times editorial board and Prime Minister Binyamin Netanyahu picked up steam over the weekend, with the Times blasting Netanyahu for his loud opposition to Washington’s policies, and Netanyahu confidant Gilad Erdan penning a response on Netanyahu’s behalf. Continue Reading »

Netanyahu in NYT interview: Churchill & Herzl were even more alone

Amid tensions with paper, Israel’s PM speaks with New York Times. Although Netanyahu reiterates intentions regarding Iran, the paper chooses to focus on his growing isolation, taking jab at Netanyahu, saying ‘such isolation is hardly new to man with few personal friends’.

WASHINGTON – Only a week and a half after taking a jab at the New York Times during his UN speech – a move that earned him a critical op-ed in the prestigious paper – Prime Minister Benjamin Netanyahu gave the paper an interview as part of his current media blitz. 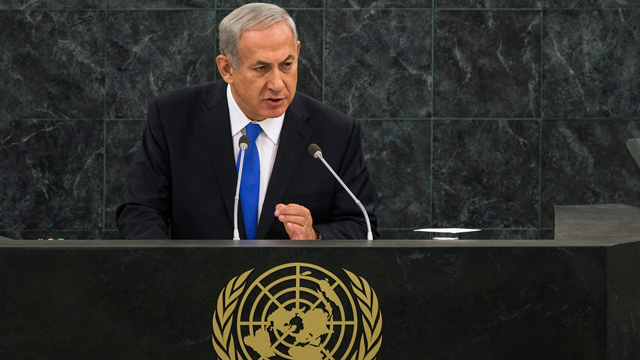 The story mostly focused on Netanyahu himself and depicted the Israeli leader as growing more and more isolated because of his hawkish stance on Iran – a position which according to NYT, the prime minister is no stranger to. Continue Reading »

NYT daily dishes out fierce criticism of Netanyahu following his General Assembly address, says the PM ‘seems eager for a fight. It could be disastrous if Netanyahu and his supporters in Congress were so blinded by distrust that they sabotage the best chance to restore relations’

Prime Minister Benjamin Netanyahu is trying to “sabotage the best chance” to restore relations between the West and Iran, the New York Times is claiming in an editorial following Netanyahu’s General Assembly address.

“Netanyahu has legitimate reasons to be wary of any Iranian overtures.. Continue Reading »

Outgoing Palestinian PM Salam Fayyad, who was quoted slamming the PA leadership, says he was misled by the NYT correspondent.

Salam Fayyad has denied criticizing the Palestinian Authority leadership in an interview with the New York Times.

In a statement published on Saturday by the Palestinian Wafa news agency, the prime minister’s office said that Fayyad “did not make any statements or conduct any interviews for the New York Times or any other newspaper or agency since his resignation.”

In an article published on Friday titled “Fayyad steps down, not out,” New York Times correspondent and columnist Roger Cohen quotes Fayyad as saying: “Our story is a story of failed leadership, from way early on… It is incredible that the fate of the Palestinian people has been in the hands of leaders so entirely casual, so guided by spur-of-the-moment decisions… we hold ourselves hostage to our own rhetoric.” Continue Reading »

Mofaz: ‘Palestinians should get 100% of their territorial demands’

Kadima Chairman MK Shaul Mofaz gets flak from Right and his own party for interview given to The New York Times • Kadima MK Schneller: He who goes back to the warm embrace of the Left…cannot be prime minister.

In the article entitled “Defying an Image With a Tilt to the Left,” Mofaz is quoted as saying that while he believes Israel should keep its current settlement blocs, the Palestinians should get 100 percent of their territorial demands met via land swaps.

The New York Times is supposed to be the paper of record. Implicitly, it holds itself to a high standard of journalism. Its reporting on the massacre of Jews at a school in Toulouse, however, illustrates how the paper’s ideological bent, particularly its advocacy for the Palestinians, subtly interferes with its coverage of events that just tangentially touch upon the Israeli-Palestinian conflict.

In its first report of the killings on March 20, The Times recalls the recent history of anti-Semitic massacres in France. It establishes

The shooting on Monday was the deadliest anti-Semitic attack in France since 1982, when the Chez Jo Goldenberg restaurant in Paris was bombed at lunchtime, killing 6 people and wounding 22.