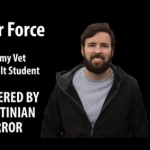 WATCH VIDEO: Breaking down largely along partisan lines, democrats debate against legislation that would deduct funding to the Palestinians if PA leadership continues to divvy out monthly stipends to jailed terrorists and the families of terrorists that were killed.

Twenty-nine-year-old Taylor Force survived military tours in both Afghanistan and Iraq, but never returned home from a visit to Israel. In March 2016, the US veteran was stabbed to death in Jaffa (located adjacent to Tel Aviv), a victim of a months-long violent uprising—dubbed the “Stabbing Intifada”—which killed dozens of Israelis and resulted in the deaths of more than 200 Palestinians (mostly attackers subsequently killed by security forces). Continue Reading »