Tag Archive for University of Wisconsin 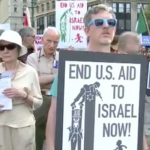 During the debate over a divestment resolution, University of Wisconsin anti-Israel activists called the Jewish community “oppressors”, saying Jewish students oppose divestment against Israel because it threatens their “white privilege.”

The student government of the University of Wisconsin-Madison unanimously passed on Wednesday a divestment resolution targeting companies operating in many countries that included an amendment specifically about Israel.

An amendment added to the one-page resolution, which Jewish students said brought the resolution more in line with the proposal that failed a month ago, blames Israel for police violence against African-Americans, citing an exchange program in which senior American police officers travel to Israel to learn about counterterrorism, the pro-Israel organization StandWithUS said in a statement. Continue Reading »