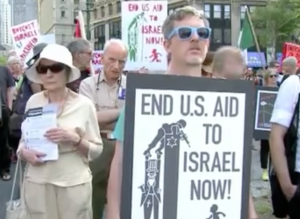 During the debate over a divestment resolution, University of Wisconsin anti-Israel activists called the Jewish community “oppressors”, saying Jewish students oppose divestment against Israel because it threatens their “white privilege.”

The student government of the University of Wisconsin-Madison unanimously passed on Wednesday a divestment resolution targeting companies operating in many countries that included an amendment specifically about Israel.

An amendment added to the one-page resolution, which Jewish students said brought the resolution more in line with the proposal that failed a month ago, blames Israel for police violence against African-Americans, citing an exchange program in which senior American police officers travel to Israel to learn about counterterrorism, the pro-Israel organization StandWithUS said in a statement.

During debate on the resolution, anti-Israel activists called the Jewish community “oppressors” and said that Jewish students oppose divestment against Israel because it threatens their “white privilege.”

A Jewish member of the Associated Students of Madison was publicly targeted and harassed by other members of the student government during the meeting as well, according to the campus Hillel.

“The behavior of members of ASM to publicly target and harass the Jewish students and in particular the one Jewish student on ASM was reprehensible,” the university Hillel’s executive director, Greg Steinberger, said in a statement issued following the meeting. “We look forward to engaging the university and the state in a review of what happened tonight at the ASM meeting.”

In a statement issued after the vote, the university administration said the resolution is non-binding and will not result in a change in university policies or its approach to investing.

The resolution passed Wednesday by the Associated Students of Madison by a 24-0 vote, with two abstentions, calls on the university and its foundation to divest from companies involved in private prisons, arms manufacture, fossil fuels and border walls, and banks that “oppress marginalized communities.”

The vote comes a month after a divestment resolution specifically targeting Israel failed to pass the student government and two weeks after the student government passed a proposal to create a new financial transparency and ethics subcommittee. The meeting was held April 12, the second day of Passover, when several Jewish representatives were absent.

Wednesday’s resolution uses language brokered between Jewish student leaders and the authors to target unethical corporations in more general terms without attacking Israel. However, during the open forum discussion prior to the vote, some students called for the one-page resolution to be amended to include specific countries and issues, the Daily Cardinal student newspaper reported.

“We are concerned that the actions taken tonight appear to violate a ruling of the Student Judiciary; Jewish members of student government, who raised this issue with the Student Judiciary, walked out of the meeting after expressing concerns that the process was undemocratic and not transparent,” the statement said.

“UW-Madison values and welcomes members of all faiths and identities. We have heard clearly from the Jewish community how targeted they feel by the actions of the last month. Chancellor [Rebecca] Blank has made clear her opposition to the concept of BDS and academic boycotts.”