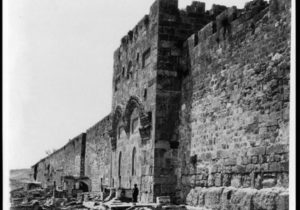 Last Friday, thousands of Arab Muslims chanting “Allah Hu Akbar broke the status quo on the Temple Mount again when they entered an area known as the Golden Gate or Bab al-Rahma (Gate of Mercy) in Arabic.

The locked inside (green) gate of the Gate of Mercy, or Shaar HaRachamim in Hebrew, also called the Golden Gate, as seen from inside the Temple Mount complex. – Photo: Wikimedia Commons

The Golden Gate, or Sha’ar HaRachamim in Hebrew, will be the gate the Messiah will use in the future to enter the Temple Mount (according to Jewish tradition) and  had been closed for the public since 2003 after Hamas and the northern branch of The Islamic Movement in Israel started to use it to carry out  anti-Israeli political activities.

Khader said the rioters “scored a big victory on behalf of all Arabs and Muslims”.

Looking down at Muslims praying outside the ‘closed area’ of the Golden Gate – Screenshot: YouTube

His colleague Mohammed Shtayyeh boosted the action “proves that all Israeli decisions and measures to Judaize Jerusalem have failed.”

The Israeli police didn’t attempt to foil the violent take-over of the Golden Gate area and instead decided to arrest scores of Muslim activists who were released the same day.

On Saturday,however, the police arrested two prominent Arab Palestinian activists who they think were behind the organization of the the Golden Gate action.

Ha’aretz analyst Amos Harel thinks the unrest around the Golden Gate is related to the Israeli decision to halt the transfer of tax revenues and import duties to the Palestinian Authority over its so-called ‘pay to slay’ policy of distributing monthly stipends to jailed Palestinian terrorists and their families.

Harel calls the situation in Jerusalem a “ticking bomb that could upend the Israeli election”.

He’s right about the ticking bomb but is dead wrong about the connection to the decision to withhold the funds the PA uses to pay terrorists who killed or wounded Israelis and their families.

First of all, as Harel himself admits, tensions on the Temple Mount spiked roughly a week before the decision of the Israeli Security Cabinet.

This happened after the Jordanian custodian Wakf  formed a new extended council that would administer the Temple Mount.

The new council now consists of Fatah members and PA officials next to Muslim Brotherhood members with ties to the radical northern branch of the Islamic Movement in Israel and to the Islamist regime of Turkish leader Recep Tayyip Erdogan.

The new Wakf council openly encouraged the renewed violence on the Temple Mount and the take-over of the Golden Gate under the pretext that Israel was planning to build a house of prayer for Jews there.

Of course, there is no such plan but Mahmoud Habbash, Religious Affairs Adviser to PA leader Mahmoud Abbas nevertheless deemed it necessary to call upon his fellow Muslims to defend the Temple Mount.

Habbash said the Golden Gate was part of “the Islamic doctrine” and warned Muslims not to concede one inch of Jerusalem and the Temple Mount since that would be equal to conceding Mecca and the Quran.

Secondly, Jordan and the PA seem to brace for the publication of President Donald Trump’s ‘deal of the century’ the not yet published new American peace initiative which has already been rejected out of hand by the PA and other Palestinian groups.

Full Palestinian control over the entire Temple Mount will challenge Israel’s drive for international recognition of its sovereignty over all of Jerusalem and will establish facts on the ground Trump’s peace team can’t ignore.

Then there is the fact that foreign actors are trying to interfere with internal Israeli affairs in Jerusalem and are funding and inciting Arab activists in the eastern, northern and southern part of the city against Israel.

Jordan has historically administered the Muslim shrines on the Temple Mount and is aware of attempts by other Muslim states to get a foothold in Jerusalem.

Saudi Arabia and Marocco are two of these foreign countries while  Erdogan’s Islamist regime in Turkey is the other one.

Dr. David Koren of the Jerusalem Institute for Strategy and Security, says “Turkish popularity in eastern Jerusalem has grown so much in recent years that leaders in Jordan, Saudi Arabia, and the PA have told Israel that Erdogan was building up spheres of influence in eastern Jerusalem that jeopardized their interests and those of Israel.”

The Turks work together with local Muslim Brotherhood members and fund a large part of the so-called Dawa activities (charity with the goal of persuasion and proselytizing) in Jerusalem.

There are also non-state actors actively working to establish full Muslim control over the Temple Mount and at least in Arab Jerusalem.

One of them is the Islamist organization Hizb ut-Tahrir (the party of the liberation) an organization which was founded in Jerusalem but has now branches all over the world.

Hizb ut-Tahrir, just like ISIS, wants to establish a global Caliphate but aspires to do so through Dawa and non-violent Jihad.

In Israel, Hizb ut-Tahrir aims to replace the ‘Zionist’ government and replace it with a Muslim government which strictly adheres to Sharia, Muslim law.

So far, the global Islamist organization has not succeeded to mobilize the Muslim masses in Israel and only tries to enforce Sharia adherence in the Arab neighborhoods and suburbs of Jerusalem.

The PA and Jordan are now working together to foil an Israeli plan which aims to significantly improve living conditions in the Arab parts of Jerusalem and to change the matriculation programs at Arab schools in the city.

The massive Israeli rehabilitation program in Arab Jerusalem is viewed by the PA and Jordan as a ‘Zionist plot’ to uproot the Palestinian and Muslim character of Jerusalem.

Another reason the PA and Jordan increased their cooperation on Jerusalem-related issues is to thwart Islamist dominance over the Arab Muslims in Jerusalem and to reinforce Palestinian Jordanian control over what is generally dubbed East-Jerusalem (north, east and southern Jerusalem).