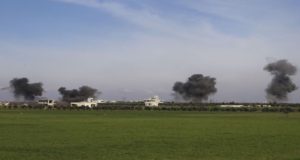 Reuters, in the meantime, cited a senior commander with pro-Assad forces in the area as saying that nine fighters were killed and 30 other wounded in a Turkish strike at a Hezbollah HQ near Saraqeb.

According to the report, Turkey used missiles and drones in the deadly attack.

SOHR says some 45 fighters were killed as the Turkish troops shelled the pro-regime forces, including the Syrian army, local fighters and Iran-backed militias.

On Saturday, Turkey’s Erdogan said the Syrian regime will “pay a price” for an earlier strike that left 33 Turkish soldiers dead.

He also said he urged his Russian counterpart Putin to stay out of the confrontation, allowing Turkey deal with the regime one on one.

Iran-backed Hezbollah supported the Assad regime throughout the war, with some of the available reports indicating that it started to send in its fighters to fight side by side with loyalist forces as early as in 2012.