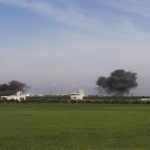 Russia Today reports Israel Air Force jets used a Turkish air base to launch an attack on a Syria weapons depot in Latakia earlier this month.

Israel’s PM Netanyahu: I’m not in the habit of saying what we did or didn’t do.

Turkey helped Israel carry out an attack on a Syrian arms depot earlier this month, Russia Today reported on its website on Monday. According to the report, Israeli jets used a Turkish military base to launch one of its airstrikes targeting an arms store in the Syrian port city of Latakia on July 5.

Because Israel allegedly carried out an air raid on Hezbollah’s weapons convoy at Syria’s border with Lebanon earlier this week, Turkey’s FM Ahmet Davutoglu asks: Why didn’t Assad even throw a pebble when Israeli jets were flying over his palace?

Turkey’s Foreign Minister Ahmet Davutoglu came out against the alleged Israeli strike on the Syria-Lebanon border earlier this week, as well as criticizing President Bashar Assad’s for inaction over the attack, Turkish newspaper Hurriyet reported on Saturday.

The foreign minister, who was traveling to Belgrade, Serbia for an official visit, told reporters, “Why didn’t [Bashar] al-Assad even throw a pebble when Israeli jets were flying over his palace and playing with the dignity of his country?” Continue Reading »

Germany, Holland & the U.S. are each sending 2 batteries to Turkey & up to 400 soldiers to operate them after Ankara asked NATO for protection.

The first of six Patriot missile batteries being sent by NATO countries to defend Turkey from possible attack from Syria went operational on Saturday.

The United States, Germany and the Netherlands are each sending two batteries to Turkey and up to 400 soldiers to operate them after Ankara asked NATO for help. The Patriots are capable of shooting down hostile missiles in mid-air. Continue Reading »

The planned deployment of NATO Patriot missiles along Turkey’s border with Syria could lead to a “world war” that would threaten Europe as well, Iran’s military chief of staff was quoted as saying on Saturday.

A Patriot missile launched in the Negev desert, February 4, 2003 during a joint U.S. and Israeli exercise codenamed “Juniper Cobra.” – Photo by Reuters

Turkey asked NATO for the Patriot system, designed to intercept aircraft or missiles, in November to help bolster its border security after repeated episodes of gunfire from war-torn Syria spilling into Turkish territory. Continue Reading »

NATO to station Patriot missiles to protect Turkey from spillover

After the alliance’s decision to station defensive missile system to protect Turkey from spillover, Russia accuses NATO of embroiling itself into Syrian affairs.

BRUSSELS – Russia accused NATO on Friday of moving towards involvement in the Syrian conflict, three days after the alliance decided to station Patriot missiles to protect Turkey from spillover from the violence. 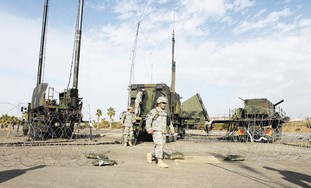 The charge came from Russia’s new ambassador to NATO, and came in spite of NATO assurances that the Patriots, which will be placed near Turkey’s border with Syria, are intended purely for defensive purposes.

“This is not a threat to us, but this is an indication that NATO is moving towards engagement and that’s it,” Alexander Grushko told reporters. Continue Reading »

Against the backdrop of Syria’s ongoing war between Bashar Assad‘s loyalists and rebel forces, academic institutions in Syria have seen a drop in the number of Druze applicants. Up until last year, some 200 students applied to Syrian universities annually, but this year, Syrian academies said that only 58 Israel-based Druze students, a Syrian source reported. 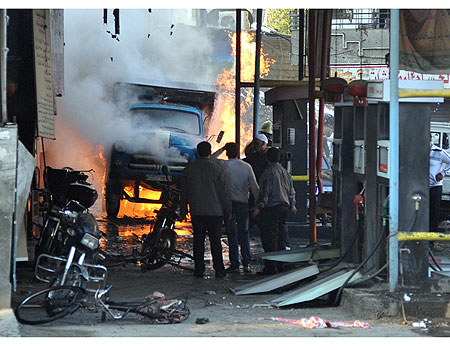 A resident of the Druze town of Majdal Shams in Israel’s Northern Golan Heights told Ynet that over the past year as a student in a Syrian university she felt her life was in danger. Continue Reading »

Turkey Seeking Patriot Missiles from NATO on its Syrian Border

Report from Ankara: Turkey is planning to ask NATO for American Patriot Missiles to help defend its southern region from Syria

Turkey is planning to ask NATO for Patriot missiles to help defend its southern region from Syria, said an Ankara source quoted by international media.

The missile defense battery would be stationed  along the country’s 910 kilometer (560 mile) border with Syria, said a senior Turkish foreign ministry official.

“An imminent official request is to be made,” the source told a reporter on condition of anonymity. “The deployment of these type of missiles as a step to counter threats is routine under NATO regulations,” the official said. Continue Reading »

State-run news reports that Turkey responded to a mortar shell fired from Syria; Turkish PM Erdogan warns, Turkey “not far” from war, saying those who “test” Turkey are “making a fatal mistake.”

The Turkish military returned fire after a mortar bomb fired from Syria landed in countryside in southern Turkey, the state-run Anatolian news agency reported the governor of Hatay province as saying on Friday.

Turkish Prime Minister Tayyip Erdogan warned on Friday his country was “not far” from war with Syria following cross-border attacks this week – words which highlighted the danger that the uprising against Syrian President Bashar Asaad will drag in its neighbors.