Egypt’s security establishment is convinced that the weaponry and tactical capabilities displayed in last week’s attack on one of its patrol boats, and Ansar’s deadly two-day siege of the Sinai town of Sheikh Zuweid, point to assistance extending beyond the diffuse network of supplies and personnel deployed by Islamic State from Libya through to Syria and Iraq.

Hamas-run Gaza media outlets were the first to release images of the July 16 attack on the patrol boat and the Egyptian navy’s rescue effort. 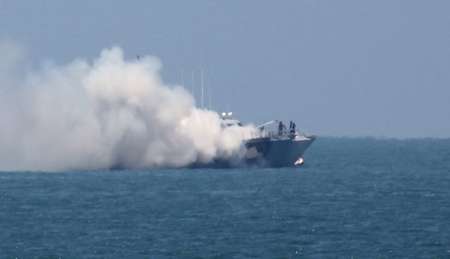 A picture shows smoke billowing from an Egyptian naval vessel on the maritime border between Egypt and the Palestinian Gaza Strip, off the coast of Rafah in southern Gaza, on July 16, 2015. – Photo: AFP/Said Khatib

“We are facing intelligence bodies that chose the timing, prepared the attack and the elements that executed it, seeking to confront the Egyptian state and military,” Major General Hisham El-Halaby told the semi-official daily Al Ahram after the attack earlier this month at Sheikh Zuweid.

El-Halaby, who teaches at the National Defense College, added that the Sinai-based Ansar Bayt al-Maqdis has demonstrated access to anti-aircraft and C4 explosives seemingly not available to Islamist militants who have staged operations in other parts of Egypt.

Just a week after the fiercest battle at Sheikh Zuweid, which required Cairo to deploy F-16 fighter jets and dispatch troops from east of the Canal Zone, Egyptian military sources claimed they had captured Turkish intelligence officers working alongside the Islamic State in Sinai.

While Turkey’s Foreign Ministry condemned the attacks in Sheik Zuweid and Turkey’s former president Abdullah Gul has urged his successor Recep Tayyip Erdogan to pursue a “more realistic” policy toward Egyptian leader Abdel Fatah Al-Sisi, Cairo is livid about Ankara’s partnership with the outlawed Muslim Brotherhood and Hamas in Gaza, and links elements of those organizations to the IS Sinai group.

Pro-forma condemnations of violence notwithstanding, Istanbul has become a base for Brotherhood and Hamas military planning- and political communications. Amr Darrag, co-founder of the dissolved Freedom and Justice Party, works out of the Turkish metropolis as does Saleh Arouri, a senior coordinator for the Hamas military wing. Islamist broadcasters Al-Sharq, Egypt Now, and Rabba TV are based in Ankara and Istanbul. Some Egyptian intelligence sources allege that Turkey has provided passports for IS fighters. 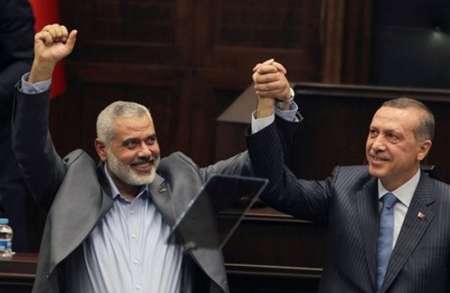 “Such arrangements took place in Turkey via leading figures of the international Muslim Brotherhood organization. They are all partners in the terrorist attacks,” claimed Maj. Gen. Talaat Moussa, former head of Egypt’s military intelligence in an interview with Al Ahram.

US Defense Secretary Ashton Carter is skipping both Ankara and Cairo on this week’s post-nuclear deal tour of the Middle East, which focuses on calming fears in Israel, Jordan and Saudi Arabia.

But Israel, like Egypt, has increasingly singled out Turkey as a supporter of Islamist militancy in the region, and Carter is likely to be presented with details of the activities organized in Istanbul by Hamas operative Salah Aruri who was accused last week by Israeli Defense Minister Moshe Ya’alon of coordinating terrorism from a safe base in a NATO country.

Summarizing the accusations of Turkish meddling in the Sinai insurgency, Israeli Col. (ret.) Jacques Neriah wrote on the website of the Jerusalem Center for Public Affairs that this was the first time Turkey “would have ever engaged actively in efforts to destabilize and even topple the Sisi regime…”

Last week Egypt completed the dredging for the second lane of the Suez Canal, a project financed by millions of individual Egyptian bond buyers demonstrating hope that President Sisi can reinvigorate the economy.

Cairo is waiting for a response from Ankara to its invitation to join Sisi as ships travel simultaneously in two directions along the canal for the first time in its history. If the invitation is declined, it will be safe to assume that Turkey stands with the forces intent on wrecking the party.

Jacob Wirtschafter is a Middle East correspondent for Associated Reporters Abroad and a contributor to i24 News from Cairo. His Twitter handle: @levantreporter