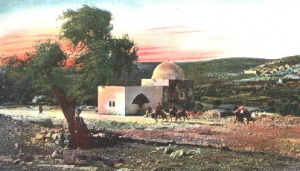 Despite succsessfully removing sensitive Jewish-related holy sites in Jerusalem from an upcoming UNESCO meeting, Arab states are claiming other historicly Jewish sites, including the Cave of the Patriarchs and the Tomb of Rachel, as Palestinian sites.

In a diplomatic win for Israel, the Temple Mount and Western Wall will not be mentioned nor included in any vote or measure during a meeting of the UNESCO Executive Board on Jerusalem and the territories May 1st.

A draft of the decision, which Ynet obtained, represents a significant achievement for the Ministry of Foreign Affairs and Israeli diplomacy at UNESCO, which is considered one of the most hostile arenas for Israel at the UN.

The issue of Jerusalem at UNESCO has seen some extremely sensitive issues brought to the forefront, including a resolution seen by many as an attempt to erase Jewish connections to holy sites in Jerusalem.

Arab states have decided to take a step back from the sensitive issue of Jerusalem and their resolution was shortened from six pages to two. Additionally, the language was clearly softened in comparison to previous draft resolutions.

According to Israel however, despite the exclusion of Jerusalem, the proposal is still rife with political elements and falsehoods that have no business being included in an international organization, especially one that is ostensibly concerned with education and science.

In the last two weeks, a concerted effort has been put forth by the foreign ministry, the Israeli delegation in Paris and Prime Minister Benjamin Netanyahu.

Two weeks ago, a UNESCO delegation of foreign officials arrived in Israel for a tour of the country and Jerusalem in order to understand the complex reality that pervades in the area.

Israeli envoy to UNESCO, Carmel Shama Hacohen, said, “When you’re talking about anti-Israel resolutions initiated by Arab countries, achievements and conclusions are only counted on the stairs at the exit of the building after the vote.

“It is preferable to accept a draft resolution without a direct stab to the heart of the Jewish people, but we have no intention of keeping quiet when we are being stabbed in other places, even if they are less sensitive. The State of Israel has decided to put an end to the incitement and obsession against it in international organizations, even if it takes years.”

Shama added, “There is no doubt that the new administration in Washington DC under the leadership of President Donald Trump and the wonderful US Ambassador to the UN, Nikki Haley, have made the goal that seemed fantasy achievable. We will work around the world this month around the clock to continue explaining our truth, both current and historical, and we will observe the sanity and fairness of our neighbors.”

The Arab proposal still contains several problematic clauses, including: a section that calls the Cave of the Patriarchs and the Tomb of Rachel Palestinian sites; a clause that states that any legal and administrative decision in all of Jerusalem “by the occupying power” is illegal and another clause that states that any past decision is recognized, including the decision to erase Jewish connections from the Temple Mount.

Carmel Shama Hacohen, the Israeli UNESCO ambassador, doesn’t shy away from saying it as it is. The resolution on Jerusalem, denying ties to Jewish history, is disappointing and inexplicable.

Israel is demanding to remove the clause entirely or to specify that decisions related to the Temple Mount are not binding.