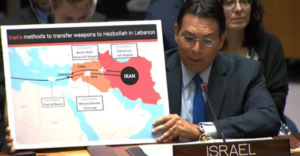 Speaking at the UN just days after Iran seized a British oil tanker and amidst growing tension between the Islamic republic and the West, Danon urged the international community to take action against Tehran and counter its regional aggression.

Three sites inside downtown Beirut; one at Port of Beirut docks, one near the Int’l Airport and the third alongside Beirut’s football stadium, where engineers are working to convert Hezbollah surface-to-surface missiles into precision-guided missiles – Screenshot: i24NEWS

“Israel discovered that Iran and its Quds Force have been exploiting civilian maritime channels, and specifically the Port of Beirut,” Danon said. “The Iranian regime is transferring weapons in various ways. They use commercial companies, mainly from Europe, to support Hezbollah and develop its missile program. Unfortunately, the port of Beirut has become Hezbollah’s port,” he lamented.

“Led by the Quds Force, dual-use items are smuggled into Lebanon to advance Hezbollah’s rocket and missile capabilities,” Danon said, referring to items that can have both a military and civilian purpose, and hence can be transferred through normal trade routes.

“Iran and Hezbollah were able to purchase dual-use equipment from civilian companies while concealing the true nature of these purchases,” Danon said.

Danon also showed a map with the various routes used by Iran to arm Hezbollah, saying that it was bypassing the international prohibition on arming Hezbollah, as well as using Syria as a central hub.

Danon asked each member state of the United Nations to ask itself whether it was “absolutely sure your companies are not the ones selling dual-use equipment to Hezbollah,” and warned that the international community “does not have the luxury of giving the Iranian regime the benefit of the doubt.”