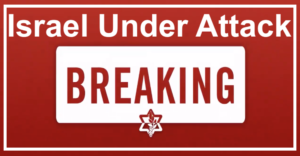 Magen David Adom said one of the victim was an 80-year-old resident of the city. The identity of the other victim is still unknown. Two other people sustained wounds in the rocket attack, including one person who is in a critical condition. Another person suffered serious injuries.

WATCH: Operational update with LTC Jonathan Conricus at a house hit by a rocket in the city of Ashkelon earlier today. https://t.co/CIvgQSvFz2

The southern cities of Ashdod and Ashkelon sustained over ten direct hits from rockets after Gaza militants fired 137 projectiles in five minutes in what Hamas said was “largest ever barrage”.

This the first time Ashdod was targeted by rockets since the start of the current round of fighting between Israel and the terror groups in Gaza.

The massive bombardment came shortly after the Islamic Jihad confirmed two of its military wing’s senior officials were killed in an IDF strike on an apartment in a multi-story residential building.

Palestinians reported the apartment belonged to Mohhamad Salim Abu Al Atta, the brother of a Islamic Jihad commander killed by Israel in 2019. He appears to have been seriously wounded in the strike.

In an unusual move, Hamas also announced Tuesday morning that several people were killed and some were missing after an IDF attack on a building used by its members.

Shortly after the bombardment, Hamas issued another statement, calling it “the largest ever” rocket salvo and claiming they fired 137 rockets in five minutes.

Two of the direct hits occurred in Ashdod and six in Ashkelon, including a school. 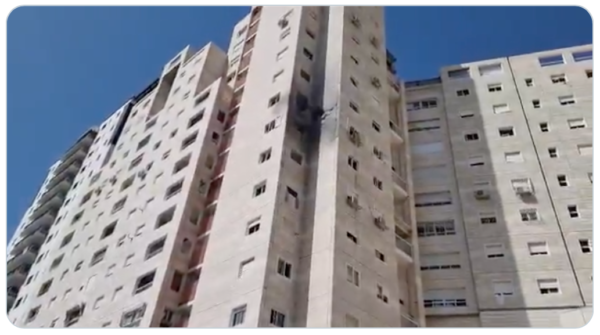 Four people, including a young girl, were lightly hurt in Ashdod after suffering shrapnel wounds. Magen David Adom teams also provided treatment to a man in his 40s, who was lightly injured while running for the bomb shelter.

More than 300 rockets have been fired from the Strip since Monday evening, when Hamas launched a barrage at the Jerusalem area in response to what it called Israeli “crimes” in the capital. The IDF has responded with airstrikes on dozens of targets in Gaza, in what it has dubbed “Operation Guardian of the Walls.”

Ashkelon became the preferred target for Gaza militants in this round of fighting and earlier in the day, at least six people were wounded when two residential buildings were hit in the city in the early hours of Tuesday.

The southern city, which is just 6km from Gaza, was targeted by dozens of rockets in a period of some 30 minutes.

Following the alarms that sounded in the Ashkelon and Ashdod areas: MDA EMTs and paramedics provided treatment to 2 women who lost consciousness and are in life-threatening condition and evacuated 4 injured, including an 80 year old woman in critical condition. pic.twitter.com/ySyN14oilr

Among the wounded were four members of the same family, whose 8th-floor apartment sustained a direct hit.

The father of the family was seriously wounded, his wife suffered moderate wounds and their two children were both lightly hurt. Two other residents of the building also sustained minor injuries.

All six were being treated in hospital.