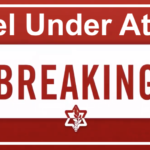 Ashdod to get Israel’s newest, most modern hospital

Directors of the new Ashdod hospital, in conjunction with Nefesh B’Nefesh, went to America to enlist the help of US medical professionals to work in Israel’s newest, state of the art hospital.

Candidates for Aliyah with medical backgrounds recently attended an event in New York hosted by the directors of a new state of the art hospital being built in Ashdod, in partnership with Nefesh B’Nefesh.

Israel currently has a shortage of doctors, and is looking abroad at potential new immigrants to help fill the gap.

An amazing find by the Institute of Archaeology at Tel Aviv University  uncovered a system of fortifications during this summer’s excavation.

Rare and unique discoveries were found this summer at the Tel Aviv University Institute of Archaeology excavation site in Tel Ashdod-Yam – located in the harbor city of Ashdod.

The institute uncovered a system of fortifications which date back to the 8th century BCE, the remains of buildings, as well as coins and weights from the Hellenistic period.

The excavations were the first of the season and were led by Dr. Alexander Fantalkin. He discovered the remains of a kind of anchorage, a massive wall made up of mud bricks which form embankments. Continue Reading »

A barrage of four rockets was fired from Gaza toward Ashdod at around noon Saturday. One of the rockets struck a building in the city and two others landed in a residential area. A number of people suffered from anxiety. The fourth projectile did not cause any injury but damaged a vehicle. Channel 2 said four people sustained light wounds during the attack on Ashdod. They were evacuated to the Kaplan Medical Center in Rehovot. Continue Reading »

The latest terrorist truce brokered by Egypt lasted a grand total of 6 hours, until 6 a.m this morning when Gaza missiles were fired at Ashdod but missed populated areas.

The latest Gaza terrorist truce lasted a grand total of six hours, from midnight to 6 a.m., when a missile was fired at Ashdod but missed exploding in populated or industrial areas and caused no injuries or damage.

Hamas earlier this week released a video of a rocket launch, as seen below.