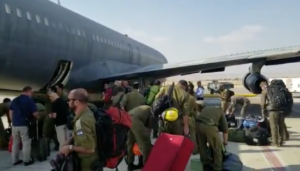 The earthquake—registering 7.1 on the Richter scale—caused 250 fatalities and injuries to more than 2,000 people.

The IDF’s rescue unit, nicknamed “Kol Shofar Lamerhak” (“The sound of the Shofar carries afar”), was made of 71 soldiers and officers. It touched down in Mexico City with a primary mission of assisting in mapping and scanning buildings hit by the quake to ascertain whether they should be demolished or may still be habitable.

The delegation included dozens of Home Front Command construction specialists and engineers, after Mexican authorities made clear they had no need for search & rescue or medical forces.

Lt.-Col. Itamar Cohen, commander of the emergency unit, said arriving to Mexico City just 36 hours after the quake allowed the IDF men to still attempt to participate in life-saving operations.

Rescuers reported a Home Front Command team was examining wreckage in order to locate anyone who might still be alive inside, while two additional teams are attempting to do the same in nearby buildings. “We’ll stay here as long as it takes to continue carrying out rescue operations,” said Cohen.

One of the buildings an Israeli team worked on – Photo: Israel’s Ministry of Foreign Affairs

Due to the earthquake, the World Para Swimming Championships—set to take place near the end of the month in Mexico City—were postponed.

The Israeli delegation to the games, which was comprised of six swimmers—including Olympic medalist Inbal Pezaro—a coach and three other staff people, returned to Israel in the same plane that brought the army’s rescue unit to the country.

Eleven killed in church during baptism

While rescue efforts are still ongoing, the extent of the damage caused to the north American country is starting to come to light. One incident was particularly tragic, with a Catholic church collapsing in Atzala, a city in the state of Puebla.

Santiago the Apostle Catholic Church was the site of a baptism for a two-month old baby when the earthquake hit. The structure collapsed, killing 11 family members, including the infant herself and three other children. The only survivors were the baby’s father, the priest administering the service and his assistant.

“It was a scene of horror and sadness with most of the people inside the church dying,” priest’s assistant Lorenzo Sanchez recounted the events.

Sanchez said those who survived moved to the edges of the church when the swaying started while those who died didn’t have time to do so.

Mexico City’s Mayor Miguel Ángel Mancera said 52 have been removed from the wreckage alive so far, two days after the earthquake, while 114 people were killed in the capital alone.

The Associated Press contributed to this report.