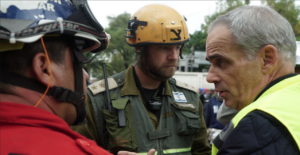 The IDF delegation to Mexico City on Saturday continued searching through the wreckage caused by the deadly 7.1 magnitude earthquake that devastated the country earlier this week, though at this point the chances of finding survivors are said to be very small.Because of the bleak assessments, the Israeli delegation—after consultations with the Mexican, American and Japanese rescue teams also operating in the city—gave up its surgical search methods over the last two days in favor of more massive, large-scale efforts.

Mexico was hit with a new, 6.2 magnitude earthquake on Saturday, halting search efforts for a few hours in the morning, until local engineers could ascertain whether it was safe to continue.

The Israeli delegation, which includes both rescuers and engineers, is leading around-the-clock search efforts at the office building alongside teams from the United States and Colombia.

Lt. Col. (res.) Itamar Cohen, who commands teams at the office building collapse site, told Ynet that “The chances we’ll find living survivors at the site we’re working are slim. But our job is to get to all of the trapped so their families could bury them.”Search and rescue forces estimate 45 people believed to be dead remain trapped in the building.

Lt. Col. Cohen spoke about the difficulties in facing the families of those trapped in the building. “It’s very hard on the families. Before we started working with heavy machinery at the site, we realized they might think we’ve given up on their loved ones. So we gathered them and in a very difficult conversation explained to them we were trained and experienced teams. Only after they understood this, they agreed for us to bring in a massive 350-ton crane so we can lift the wreckage from the structure’s upper parts. We’ve also started cutting through walls that collapsed,” he explained.

Lt. Col. Cohen said the Israeli delegate was met with a lot of support from the local residents. “It’s hard to believe just how immense the solidarity felt here is, we’ve never seen something like this. Even after an Israeli team extracted a body from the wreckage, they clapped,” he said.

In addition to the search and rescue forces, Israeli engineers are surveying structures in the city to determine whether they were safe following the earthquake.

One of the engineers surveying a hospital in the city on Friday recommended closing down the parking garage due to fear it would collapse.

Prime Minister Benjamin Netanyahu spoke on the phone to Israeli Ambassador to Mexico, Yoni Peled, and the commander of the IDF delegation, Col. Dudi Mizrahi, on Saturday.

“What you are doing is a mitzvah,” Netanyahu told them. “You are shining Israel’s light in the world, a big light. It is important from a humanitarian standpoint and also to show the world the true Israel. You are making the State of Israel very proud.”