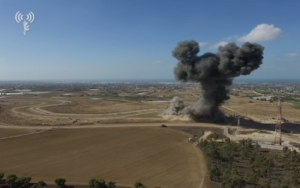 “We have liquidated a terrorist tunnel in the Kerem Shalom area. As for the identity of the terrorists, we will not close this chapter until we eliminate those responsible for the terrorist act,” Liberman said.

The strike is the last of a long series of strikes taking aims at tunnel infrastructure built by Hamas to infiltrate Israeli territory in the South.

The strike was previously reported by the military, which however did not provide details on the operation.

For instance, the IDF did not specify whether the strikes were carried out by air or artillery forces.

The fresh strikes came after a rocket was fired at Israel from Gaza on Sunday night, in the second consecutive night of conflict in the country’s south.

Israel holds the Islamist Palestinian movement Hamas responsible for any aggression emanating from the blockaded coastal enclave and responds, usually immediately, to any strikes on its territory.

“Hamas is responsible for anything that happens in the Strip and whatever comes out of it, both over and underground,” the IDF said in a statement.

Rocket sirens blared in the Sha’ar HaNegev Regional Council and in the town of Sderot at around 22:00 local time, sending residents scurrying for shelter.

The Israel Defense Forces (IDF) were locating for an impact site. Rockets occasionally misfire and fall within Gaza’s borders.

The overnight flare-up came just 24-hours after Israel carried out a “large-scale attack” on Hamas targets in the Gaza Strip overnight Saturday, sparked after Israeli soldiers were wounded by an explosive device along the Palestinian enclave’s border earlier in the day.

Israeli jets pounded 18 Hamas targets throughout the Strip in two waves of air strikes over a 24-hour period, the IDF said.

Hamas and Israel have fought three wars since 2008, and the last conflict in 2014 was waged in part over tunnels from Gaza that were used to launch attacks.

Israeli aircraft hit Hamas targets in the southern Gaza Strip repeatedly in early February, after it said Palestinians there fired a rocket into the Jewish state.