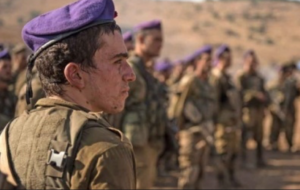 Eleven years ago, Weinberg was living in Versailles with his father. “I came back from synagogue wearing a kippah and a group of eight youths jumped me, stabbed me in the stomach, beat me in the head while shouting ‘Jewish son of a bitch’ and other anti-Semitic slurs,” Weinberg recalls.

He was hospitalized for a month in very serious condition.

“I was unconscious and on a respirator, and it was really tough. I was in shock from what had happened,” he says.

Weinberg says it took him two months to recover from the attack, “and then I realized that in a situation like that of brutality against Jews for being Jews, France was no place for me.”

Eventually, after a short visit to Israel, during which Weinberg grew attached to the country, he decided to go along with his father’s plan to make aliyah.

“My father planned to make aliyah, but unfortunately he died of a heart attack four years ago, at age 54 and didn’t manage to see his dream through. It was a very difficult time for me, which made me want to make aliyah and fulfill my father’s dream even more,” Weinberg says.

Two and a half years ago, Weinberg moved to Israel and began studying Hebrew in ulpan. He enlisted in the IDF eight months ago, with the intent of serving in a combat unit. He refused to budge from the IDF’s main enlistment office until he was cleared to start basic training with the Givati Brigade.

Last week, after an exhausting final induction march at the end of which he received his Givati beret, Weinberg was moved to tears by the sight of his mother, Silvie, who came especially from Paris to attend the ceremony.

“I was very touched that my mother came to Israel for three days just to be with me at the ceremony. … We only had one day together before she went back. I’m happy about what I’m doing, at peace with my choice and happy that my mother, who stayed in Paris with my sister, supports me,” Weinberg says.