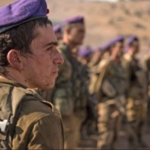 Eleven years ago, Weinberg was living in Versailles with his father.

The Israel Defense Forces has announced plans to reintroduce the operational deployment of reserve units in the Gaza sector within the next few months. Reserve soldiers in the Gaza Brigade will be deployed in the sector to relieve regular soldiers from the Infantry Corps’ Givati Brigade.

The Gaza sector is considered one of the military’s most active theaters [Illustrative] – Photo: Gideon Markowitz

The decision, made public on Monday, follows the IDF’s revision of its overall training plans as a result of cuts in the 2014 defense budget.

IDF officer killed in friendly fire incident when mistaken as a terrorist.

The identity of the soldier killed Monday due to friendly fire near Gaza has been released: Captain Tal Nahman, 21, from Nes Ziona.

Nahman was promoted to Captain posthumously. The funeral will take place at 3:00 pm Tuesday with a military ceremony at the cemetery in Nes Ziona.

Reportedly the incident occurred during a routine operation to prevent the placement of explosives on the Gaza security fence, as well as infiltration by Gazan terrorists. Continue Reading »