Kerry: Syrian assault won’t be like Afghanistan, Iraq, or Libya

US Sec. of St. Kerry promises the American people that the U.S. military action in Syria will be “limited & tailored”.

US Secretary of State John Kerry assured the war-weary American people on Friday that any decision the US would make on a military action in Syria would be a “limited and tailored response” and would not in any way resemble the US invasions of Afghanistan and Iraq, nor its intervention to help topple former Libyan dictator Muammar Gaddafi. 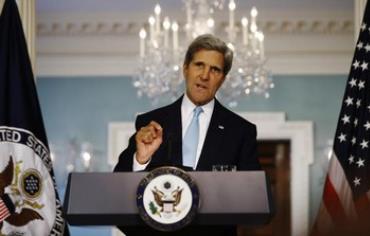 US Secretary of State John Kerry talking about possible US strike in Syria, August 30, 2013.

Momentum appeared to build Wednesday for Western military action against Syria, with the U.S. and France saying they are in position for a strike, while the government in Damascus vowed to use all possible measures to repel it.

The prospect of a dramatic U.S.-led intervention into Syria’s civil war stemmed from the West’s assertion – still not endorsed by UN inspectors – that President Bashar Assad‘s government was responsible for an alleged chemical attack on civilians outside Damascus on August 21 that the group Doctors Without Borders says killed 355 people. Continue Reading »

The NYT reports that a July 5 attack on Yakhont missiles cache wasn’t 100% successful & that possible future strikes by Israel can be expected, but the U.S. will no longer sanction them.

Israeli defense sources have declined to comment on The New York Times’ report on an alleged Israeli strike in Latakia, Syria; Israel didn’t comment either when the explosions took place on July 5. After three earlier air strikes attributed to Israel – one in January and two in the beginning of May – Israeli officials dropped hints but refused to admit that Israel was responsible. Continue Reading »

Pentagon Reports: U.S. military actions in Syria could run $1b a month

NYT Reports: General Dempsey in a letter to Congress warns that the decision to use force in military options against Assad, ‘is no less than an act of war’.

The Pentagon has provided Congress with the first list of detailed options for military intervention in Syria, the New York Times reported on Tuesday.

The scenarios were presented in a letter by chairman of the Joint Chiefs of Staff, Gen. Martin E. Dempsey, and enumerate that strikes on Syrian military targets will costs billions of dollars. Continue Reading »

UK’s The Guardian: Syria’s President Assad asked a mediator to approach Israel’s ex-Foreign Minister Avigdor Lieberman in 2012 with a request that Jerusalem not oppose the formation of an Alawite enclave.

In response Lieberman asked for information on Ron Arad’s whereabouts & the return the remains of spy Eli Cohen.

According to a report in The Guardian on Monday, Syrian President Bashar Assad sent a message to Avigdor Lieberman in 2012, when the latter was serving as foreign minister, asking Israel’s position on the establishment of an Alawite enclave in northwestern Syria.

The Guardian reported that a mediator — a well-known diplomatic figure — is understood to have been asked by Assad to approach Lieberman late last year with a request that Israel not stand in the way of attempts to form an Alawite state, which could have meant moving some displaced communities into the Golan Heights area.

The UN Security Council has demanded a halt to all military activity by the Syrian government and opposition fighters on the Golan Heights and called for stepped up measures to protect peacekeepers who have been caught in crossfire.

UN peacekeeping soldiers from Austria near the Quneitra border crossing between Israel and Syria, June 2013. – Photo by Reuters

A resolution adopted unanimously by the council on Thursday extended the mandate of the UN force monitoring the disengagement of Israeli and Syrian forces in the Golan Heights until December 31. Continue Reading »

America’s top diplomat, US Sec. of St. John Kerry has issued several as yet undelivered & perhaps undeliverable foreign policy promises, including a historic breakthrough in the Israeli-Palestinian conflict.

In four months as secretary of state, John Kerry has certainly promised great things. Now he has to deliver.

In the Middle East, he has raised hopes his solo diplomatic effort can produce a historic breakthrough ending six decades of Arab-Israeli conflict.

He has pledged to bring Syrian President Bashar Assad’s government to heel and to work with Russia to end Syria’s civil war. Continue Reading »

Resolution brought by Western powers & Arab block, urges all parties to refrain from contributing to a further escalation of the Syrian conflict.

The UN Human Rights Council on Friday condemned the use of all foreign fighters in Syria‘s civil war, including Lebanese Hezbollah militants backing the government, but stopped short of calling for a halt to the flow of arms.

An image of Syria’s President Bashar Assad is seen on a car’s windscreen as Hezbollah supporters celebrate, after the Syrian army took control of Qusair from rebel fighters. – Photo: Reuters

The Geneva forum adopted a resolution brought by Arab and Western powers, urging all parties to refrain from contributing to a further escalation of a conflict in which at least 93,000 people had been killed by the end of April. Continue Reading »

To win, Israel’s Strategic Affairs Minister Steinitz says: “It is in his (Assad’s) interest not to provoke us, so that we get involved.”

Steinitz’s assessment was quickly disavowed by others in PM Netanyahu’s coalition gov’t.

Syrian President Bashar Assad, backed by Iran and Lebanon’s Hezbollah, may prevail in the more than two-year-old uprising against him, Israel’s intelligence minister said on Monday.

Though the assessment was quickly disavowed by others in Prime Minister Benjamin Netanyahu’s coalition government, it reflected the difficulties facing Israel and Western countries in predicting Syria‘s destiny and weighing intervention. Continue Reading »

Putin commits Russian troops just a day after Vienna announced it would recall its forces from the UN monitoring force, due to worsening fighting in Syria.

President Vladimir Putin said on Thursday that Russia is ready to send peacekeepers to the Golan Heights to replace Austrian forces after Vienna said it would recall its troops from a UN monitoring force due to worsening fighting in Syria.

“We could replace the leaving Austrian contingent in this region on the border between Israeli troops and the Syrian army,” Putin told the RIA Novosti news agency. Continue Reading »

Syrian President Bashar Assad said in a television interview broadcast Thursday that Russia has fulfilled some of its weapons contracts recently, but was vague on whether this included advanced S-300 air defense systems

Assad’s actual comments differed from excerpts the TV station conducting the interview had sent to reporters in a text message on Thursday morning.

In that message, the Al-Manar station owned by the Lebanese militia Hezbollah quoted Assad as saying Syria had already received a first shipment of such missiles. Continue Reading »

Netanyahu informs European foreign ministers that after Russian missiles get to Assad, Israel’s ‘entire airspace will become a no-fly zone’ & therefore it ‘cannot stand idly by.’

In this picture taken on Thursday May 23, 2013, Israeli soldiers patrol their side near the southern Lebanese-Israeli border of Hamames village, Lebanon. – Photo: AP

Two diplomats who were in the room during the briefing last Thursday, who spoke on condition of anonymity because the meeting was a closed event, said that Amidror stressed Israel will act “to prevent the S-300 missiles from becoming operational” on Syrian soil. Continue Reading »

A New York Times report claims Israel has dropped the idea of a buffer zone in Syria as it would be seen as an invasion & spark confrontation with Assad’s forces, but is not eliminating use of a ‘proxy’ force in the country.

Israeli forces are “maintaining intense intelligence activity” in Syria and have “quietly” begun working with villagers there unallied to either the rebels or President Bashar Assad’s regime amid increasing fears that the Syrian civil war will spill over its borders, The New York Times reported on Thursday.

A United Nations observation tower overlooking Syria is seen near the Kuneitra border crossing between Israel and Syria, on the Golan Heights May 8, 2013.

Israel’s Prime Minister corrects the Times of London report that quoted a senior Israeli intelligence officer saying, he ‘does not represent the gov’t’s position,’.

A Friday report in the Times of London, according to which Israel prefers the regime of Bashar Assad than see a takeover of the country by rebel Islamist militants, is untrue, Prime Minister Benjamin Netanyahu said during a meeting of Likud ministers on Sunday.

“The statements attributed to an Israeli intelligence officer do not represent the Israeli government’s position,” Netanyahu said, according to a source present at the meeting. Continue Reading »